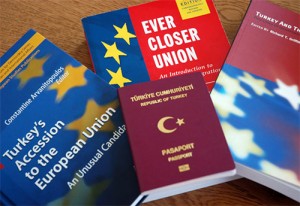 After continuous delays in accession negotiations due to series of political obstacles, the decades-long process of Turkey’s accession to the EU has gained momentum in the beginning of December 2013. Back in 2005, both Turkey and Croatia started negotiating the terms of EU membership. But Turkey’s negotiations turned out to be lengthier and much complicated than the latter, who joined the EU club as the 28th member on 1 July 2013. Despite the unsteady pace in its accession talks, after 8 years, Turkey seems to be taking a step closer to its European neighbors. According to EUbusiness, it is said that the democratic reforms and Turkey’s key role in avoiding crisis in the Middle East have helped to reopen the negotiations.

After the new round EU-Turkey accession talks in Brussels on 4 December 2013, Ahmet Davutoğlu, European Commissioner for Enlargement said at the joint news conference, “We are here today to announce a historic moment in Turkey’s integration into the EU,” referring to a great step towards the Turkish accession namely the conclusion of readmission agreement and the start of visa liberalization dialogue between two parties.

A new round of membership talks on a new chapter, Chapter 22 on regional development, began this month. It focused on discussing the provision of EU funds for Turkey’s regional development which aims to improve the environment, support the transport sector and encourage regional competitiveness, particularly in the less developed regions. At the same time, the EU took steps towards lifting visa requirements for Turkish citizens, which will enable the latters to travel visa-free to the EU countries and facilitate people-to-people contact. However, the deal is concluded under certain conditions like allowing EU governments to send back the illegal migrants to Turkey.

This agreement has undoubtedly created a new momentum in the Turkey-EU relations, yet it is still uncertain that the full membership of Turkey in the EU could be expected in near future. Turkey has to face the worrying issues including its political instability, its discreditable human rights record, its large Muslim population, and the question of Cyprus. Moreover, she has to break the reluctance of major powers towards its full EU membership. A number of EU member states, most notably France, Germany and Austria, remain skeptical of Turkish EU membership and tend to kill Turkey’s membership hopes due to sociopolitical reasons. A privileged association framework is suggested to be an alternative to an EU full membership.

In that case, will the accession be “open-ended”, meaning the country will not automatically become a member state at the end of negotiations?