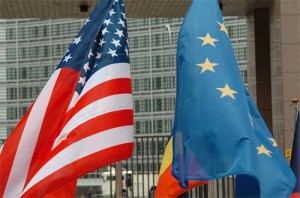 The European Commission is given green light to formally launch negotiations with the United States over the Transatlantic Trade and Investment Partnership (TTIP) as the EU Trade Council finally agreed on 14 June. The cultural sector is excluded from the negotiation mandate as a compromise to get France’s agreement, though it could be put back in as talks progress. France, wanting to shield French-language culture from Hollywood, has formerly refused to join unless films and televisions are left out of the mandate.

The TTIP trade deal, as EC president Barroso put it ” Strengthening this relationship will bring more jobs, more growth to Europe and the United States. The potential economic gains for the EU are estimated at around €120 billion a year. And the real beauty of this deal is that it will offer real returns of around €545 per average household in Europe almost for free. This makes it the cheapest stimulus package one can imagine.”

The trade talks will be launched at G8 summit next week and aimed to be finished by the end of next year. Some worried that excluding an industry from the talks would lead to a similar opt-out from the US, such as to protect its closed shipping sector.

Statement by EC President José Manuel Barroso on the TTIP