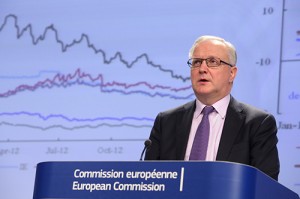 Comparing with the previous quarter, the economic output of the Eurozone has risen by 0.3% in both the euro area and the EU 28 during the second quarter of 2013. “Today’s figures, when combined with other recent positive survey data are encouraging and suggest the European economy is gradually gaining momentum,” Commission Vice-President Olli Rehn, responsible for economic and monetary affairs said in a written statement.

As one of three Eurozone states to receive a multi-billion-euro bailout, Portugal has demonstrated the fastest growth at 1.1% while the largest two economies in Europe, Germany and France, expanding 0.7% and 0.5% respectively, has exceeded the US growth figure of 0.4% recorded over the same quarter.

In eastern Europe, the Czechs is moving out of recession which is within expectations with growth of 0.7% compared with the first quarter; Hungary and Poland have grown 0.1% and 0.4% respectively.

However, the two countries, Greece and Ireland which are receiving financial rescue programmes from the EU, were among a group of seven countries which did not provide data.

Although it is encouraging news for the Eurozone, Olli Rehn has cautioned against over confidence. The Netherlands and Spain still remained in recession. The Economy of Cyprus has the weakest figures contracting by a further 1.4 percent on the previous quarter.