With just four days to go until the Referendum, Chris Hanley (Researcher and Group Leader at TNS opinion) and James Downes (Visiting Scholar, European Union Academic Programme Hong Kong, Department of Politics and Public Administration, The University of Hong Kong) discuss the recent shift towards the Leave campaign in the polls, the dynamics of the Referendum campaigns and how the next four days will be crucial in deciding the future of Britain’s relationship with the EU.

Round up of the polls: A Seismic shift in Public Opinion?

With just under a week to go, the prospects of Referendum day are beginning to shape up like the last that took place in Scotland. The last few weeks have seen a general polling trend in momentum towards Leave, with renowned polling companies such as YouGov, Ipsos MORI and ICM all putting the Leave campaign ahead. Up until this point the polls in general have been very volatile: not only have polling companies plotted Leave and Remain all over a 20 percentage point spectrum, but tracker polls within the companies have been equally scattered. For example, in ORB’s poll for the Independent on 5th June, Remain was ahead by more than 10 points and just four days later, Leave had taken the lead by the same margin. More recently, a poll conducted by YouGov between the 15th-16th and the 16th– 17th June have shown a move back towards Remain.

Mode of interviewing has proved to play a large role in these predictions. Over the past few months, online polls have largely had Remain and Leave virtually neck and neck whilst telephone polls have consistently put Remain ahead, and more often than not by a significant margin. Neither interviewing mode is perfect – each carries with it an intrinsic bias so it is difficult to favour one mode over the other. Telephone surveys for example have the advantage of utilising a random sample of respondents which should reflect the natural make-up of the population. It often, however, ends up with a skew towards older people and also suffers from the simple fact that people who pick up the phone to pollsters think and act differently to those who do not. Online surveys on the other hand are not random but quota based which means that national representation is not an issue in terms of demographics but panelists do ‘opt in’ to answer surveys like this which obviously carries with it its own bias.

In the 2015 General Election, both telephone and online polling companies were off the mark by quite a bit. The British Polling Council concluded in their report that pollsters had overrepresented the Labour voters in their sample and the myth that a ‘late swing’ towards the Tories was behind the polling faux pas was effectively debunked. This drew into question the credibility of both polling methods and just how much we could trust their projections. Polling companies will have no doubt corrected and updated their weighting strategies since the 2015 General Election but since this is a referendum, voting behavior will most likely differ anyway, especially since the issue transcends traditional party lines.

At least in terms of turnout, it is expected that it will be somewhere between the 66% of the 2015 General Election and the 85% of the Scottish referendum. And which end of the spectrum it is will end up being a decisive factor in the outcome on the 23rd June. Traditionally the older people are, the more likely they are to vote – young people are notoriously difficult to mobilise, especially in an era where apathy and disillusionment with the political system thrives. This is a huge problem for the Remain camp since teens, those in their twenties and thirties, as well as Londoners are the strongest supporters but also the least likely to turnout  to vote.

With this Referendum in particular, a difference of just 10% in turnout could be the difference between staying and leaving the EU, which makes it crucial. Although the polls are fairly volatile, they seem to be hovering around the 50:50 mark. If young people are mobilised next week, they could shift the vote share in Remain’s favour. The polling company YouGov (see Figure 1) have simulated the effect turnout might have on the result – the chart below shows that the closer turnout is to its maximum, the more likely the Referendum will result in Remain’s favour. Conversely, lower turnout is much more likely to benefit the Leave camp. 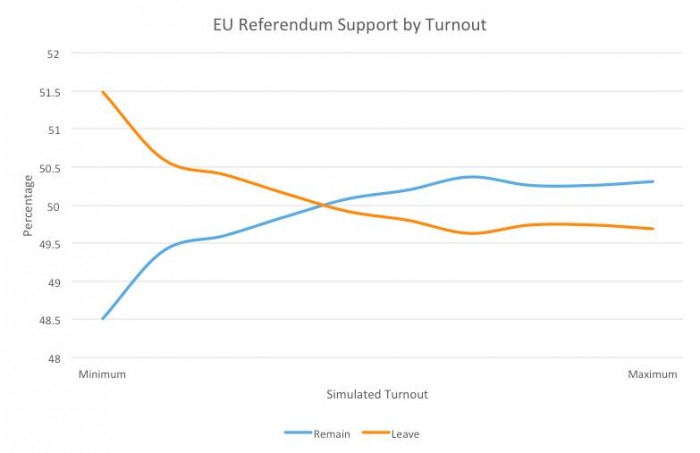 Judging by the sentiment of the dialogue around Brexit, it is clear that the Leave campaign has the more passionate supporters. The Leave narrative has predominantly revolved around immigration, security, the perceived waste of resources in Brussels and the loss of British sovereignty  – each of which has resonated strongly with the British public. On the other hand, the Remain narrative is more abstract and less tangible to the average voter, focusing on the merits of the single market and the wider economy. Furthermore, the Leave campaign benefitted from a head start, with momentum building in the camp long before Cameron even started negotiating new terms for the UK’s role within the EU. Consequently, Leave supporters are much more likely to be ‘certain’ that they will vote on the 23rd June and thus is one reason why low turnout may benefit their cause.

With the exponential growth and reach of social media it is important to assess the evolution of the debate online. As mentioned above, Leave supporters tend to be much more vocal and committed in their convictions. An analysis conducted by the Political Web however finds that at least online, Leave’s influence is still overshadowed by Remain’s. At the Political Web, they have tracked more than 800 websites, blogs and politicians and have found that despite the vehemence of the Leave campaign, the most influential people and websites tend to support and advocate Remain.

Of all the websites the Political Web monitors, it appears that the pro-Brexit group constitutes around 38% of their sample and constitutes more than half of all the websites that have taken a position. The chart below also demonstrates the conviction of the pro-Brexit group online too. Their tool looks at all the websites that have either explicitly or implicitly expressed a stance on the subject, and it shows that 40% advocate leaving the EU compared to 26% which support remaining a member of the EU. This margin is almost entirely due to the fact that Leave is more explicit in its view, retaining only 7% of sites that are classed as ‘sympathizers’ rather than supporters, compared to 19% on the remain side. 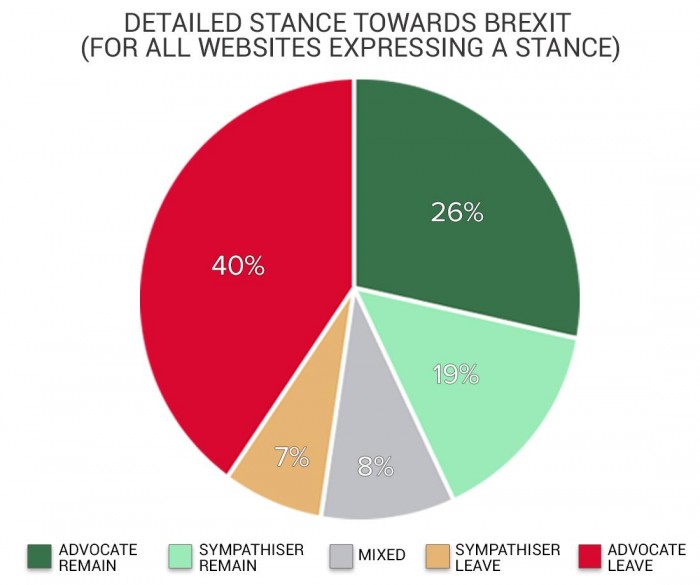 Based on the evidence in Figure 2, it appears that Brexit has had the edge online. However, the Political Web has also teamed up with Linkfluence and they identified what they call the top 30 most influential websites, which are determined by the number of inbound links they have with other sites within their website database. Of the 30 websites, only 4 are on the side of Leave. Furthermore, the average score of Remain sites is much higher than Leave sites which goes to show that while websites that advocate Brexit are more numerous, their influence and reach falls short of the Remain campaign’s.

Offline, the debate has been quite obviously dominated by the centre right, perhaps in part due to Labour’s notable silence on the topic. According to recent results, around 75% of Labour supporters support the UK remaining as part of the EU. Thus, it would have most likely been career suicide had Corbyn come out to urge his supporters to vote leave, like he might have done in the past. The Labour leader has understandably changed his stance on the EU over the last year but he has by no means been vocal about his position. YouGov released a poll a few weeks ago which demonstrated just how little the British public knew about where Labour stood. According to their findings around 45% of Labour supporters think that their party either supports Brexit or is at least split on the issue.

The Campaign: The Dynamics

The EU Referendum Events project estimates the total number of events organized in each constituency in graphical form and produces maps which depict the national, regional, and constituency based intensity of the Referendum campaign. As of June 9th, the dataset includes more than 7,700 local events from England, Scotland, and Wales that have taken place since January 1st 2016. These events include a wide range of activities, such as leafleting, door-to-door canvassing, street stalls, public meetings/speeches, and rallies.

The main findings of the project have shown how the Remain camp have held consistently more events than the Leave campaign. Professor Matthew Goodwin has outlined that “the Remain camp currently has the edge by holding more events in more densely populated areas and making more strategic choices about where it is hunting for votes.” In contrast to the Remain campaign, Leave has tended to focus on Eurosceptic heartlands in Britain. Figures 3 and 4 below outline these key areas that both Remain and Leave campaigns have focused on up to last Thursday the 16th June when. With the polls fluctuating considerably between Remain and Leave, the final four days of campaigning is likely to be crucial, with both sides seeking to capture undecided voters and stake their claim for Britain’s future.

Figure 3: The Remain Campaign After Week 9 (Through June 16th) 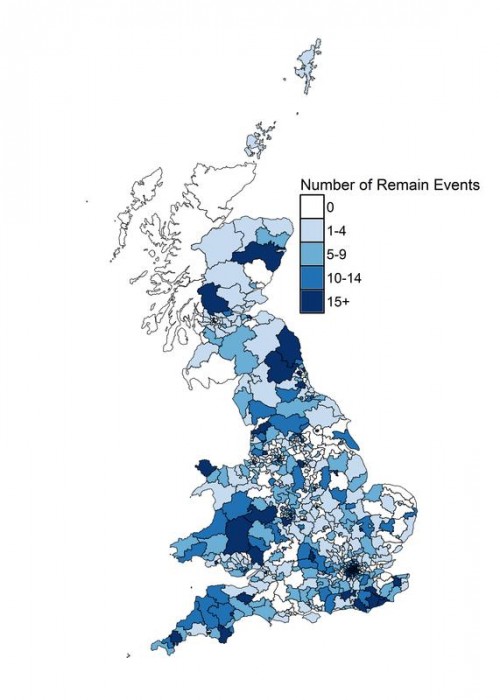 Figure 4: The Leave Campaign After Week 9 (Through June 16th) 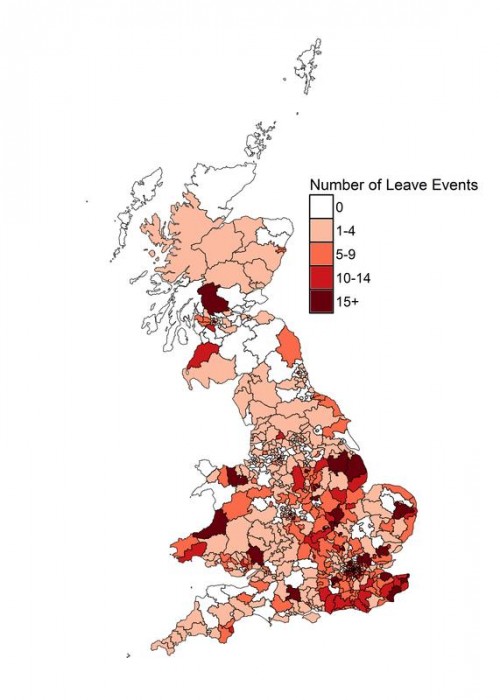 An appropriate way to sum up these developments and findings is to turn to the latest betting odds. As of Wednesday the 15th June, more than ten bookies were offering odds of 8/15 on remaining part of the EU bloc, compared to odds of 6/4 for leaving.

At Number Cruncher Politics, the probability of leaving, modelled by calculating an average of the polls, is now at 33% – this seems low but it is influenced by a long-term trend of a leading Remain campaign. And despite this, the past week’s movements have seen this probability increase by 9 points. This is shown in Figure 5 below. 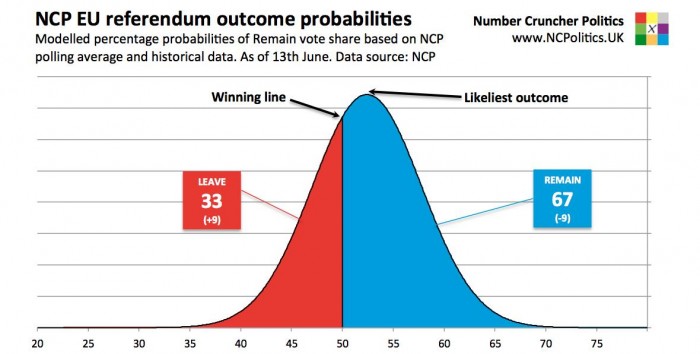 Therefore, the polling figures, campaign intensity figures and betting odds all provide us with a complex picture. The polls have significantly shifted – and the gap between online and telephone results has closed. Time will tell whether the shift towards Leave is a real phenomenon or a blip. The next four days will be crucial in deciding the future of Britain’s relationship with the EU and by Saturday we will know for sure whether Remain’s strategy of vote hunting in densely populated areas prevailed over Leave’s focus on the Eurosceptic heartlands. For now, the odds are stacked slightly in Remain’s favour but anything can happen and as the former Labour Prime Minister Harold Wilson once remarked, “A week is a long time in politics.”