Brexit vs. Bremain
70 Days to Go: This week’s round up of the polls

Brussels bombings have not boosted Brexit

Brexit hardliners were quick to jump on the Brussels bombings, blaming the attacks on the free movement of persons across the EU and how the lack of border controls lead to significant gaps in counter terrorism intelligence. The issue of immigration is highly salient with Brexit supporters and Schengen, one of the core pillars of the EU, was once again brought into the spotlight. It would not have been surprising to see Brexit bounce in the polls – but this however was not the case. Nonetheless, if we track public opinion across time, we can clearly see how Brexit has gained momentum amongst the British public. This is clearly shown in Figure 1 below, provided by Ipsos Mori and shows how the voting intention has shifted gradually across time on the EU Referendum issue.

Figure 1- Ipsos Mori Trends in Support for Remain and Leave 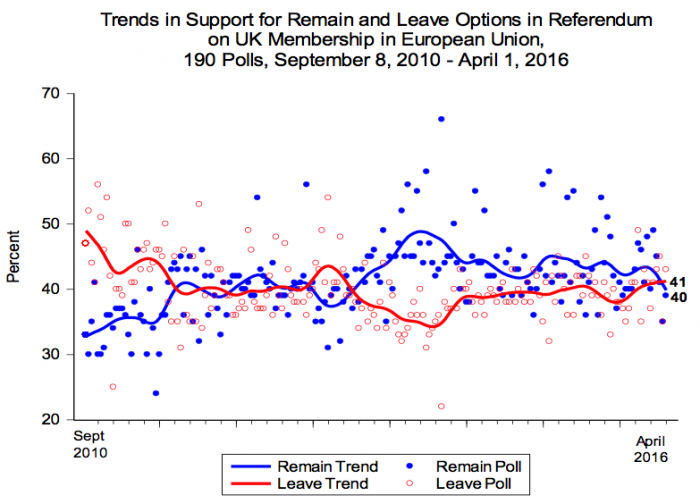 Remain and Leave: Neck and neck

An ICM poll conducted on the 12th April has also shown that the Leave campaign is now ahead of the Remain campaign. The Leave campaign is currently on 45%, with Remain on 42% and undecided voters on 12%. When undecided voters are excluded, an even more interesting picture is painted. Leave is now on 52% and Remain on 48%. So far, we have shown the evolution of the EU issue in public opinion across time. But what about the EU Referendum campaign? Which side is gaining momentum as the ground war heats up? We next turn to examining the dynamics of the campaign in British politics.

Professor Matthew Goodwin at the University of Kent has shown how the campaign war is hotting up. Preliminary analysis shows that in the ground war for votes, both Remain and Leave campaigns are focusing on their core heartlands. This can be seen in Figure 2 and is part of the UK in a Changing Europe project. It is likely that both Remain and Leave sides will aim to expand beyond their core base into areas that are lie beyond their core heartlands in the coming weeks and months. This is likely to ultimately decide the result of the EU Referendum campaign. With 70 days to go, Brexit vs. Bremain will collide and go head to head for Britain’s future in Europe.

Evidence also shows that views and opinions on Brexit are now well entrenched in the minds of the British public – people are now very unlikely to change their minds. Thus the referendum battle is slowly becoming a war between who can better mobilise their supporters to vote on the day. 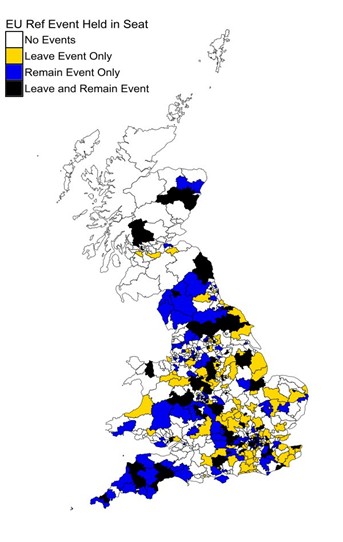 But can the polls be trusted?

There is a growing concern about the credibility and state of political polling in British Politics. This is not surprising given how far pollsters were off the mark in several notable elections last year across Europe; most notably in the 2015 British General Election. The majority of polling agencies hedged their bets on a hung parliament with both Labour and the Conservatives neck and neck. Some pollsters even put Labour ahead on the election’s eve.

A couple of weeks ago, the British Polling Council (BPC) published the findings of their inquiry into the election polling in 2015. In the report, the BPC ruled out several explanations that were circulated in the wake of election: notably the ‘late swing’, the ‘shy tory’ and ‘lazy labour’ factors – something polling companies claimed they had little power over. The BPC instead found that the polling miss primarily arose as a result of unrepresentative samples. This may sound strange given that most polls in the UK are conducted online and thus conform to quota sampling, which should in theory give an accurate reflection of the general public. Numerous studies have however proved otherwise.

Put simply, the types of people who volunteer to participate in panels are not representative of the general public. Similarly, those who agree to spend 10 minutes on the phone with a call centre also differ. At present, it has become clear that poling agencies have not been able to produce estimates that effectively account for this factor and as a result seem to over-represent the Labour share. Random probability surveys such as the British Social Attitudes Survey and the British Election Study on the other hand tend to produce much more accurate estimates, each purporting shares that closely resemble the final electoral result. Nonetheless, both of these surveys are conducted over a period of several months, which is both time consuming and extremely expensive.

Given how much cheaper online and telephone surveys are, it is unlikely that the discipline will shift back to the traditional face-to-face mode. Online polling is likely to stay and pollsters will in turn continue to try and improve their sample structures and weighting strategies. Nonetheless, it is clear that polls are still the best way of gauging public opinion and attitudes. Furthermore, it is also worth considering the point that polls are generally easier to conduct on single national issues, such as referendums, since vote share will not have to be translated into seat share like in elections. In the 2015 General Election, it was not the disparity between the polls and the vote share that shocked the public, but how the polls indicated how seats would be distributed. And let’s not forget that the polls were pretty spot on with the Scottish Referendum.