Following the Governing Council meeting of the European Central Bank (ECB) in Nicosia, Cyrus, the ECB said it would start its QE programme next week. The scheme will have an estimate of total scale of €850 billion, from next week until September 2016, with the aims of strengthening economic recovery and boosting inflation to the target 2%. According to the ECB President Mario Draghi, starting from next week the ECB will start purchasing euro public sector securities in the secondary market and will continue to purchase asset-backed securities and covered bonds, amounting to €60billion per month. The asset purchase will help release more liquidity into the market and will hence stimulate economic growth. Meanwhile, the ECB revised the economic forecast of the Eurozone, to 1.5% this year, 1.9% in 2016 and 2.1% in 2017, more positively than previously estimated. Observers comment that the ECB’s programme has sent a positive note of optimism concerning the prospect of the European economy. 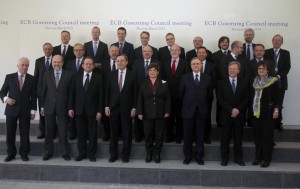