The European Central Bank (ECB) has announced, on 22nd January, its large scale bonds purchase scheme, also known as quantitative easing (QE). Starting from March this year, the ECB will buy €60 billion bonds each month from financial institutions by its newly created money until the end of September 2016. This move aims to reduce borrowing costs for businesses and individuals and, hence, boost the Eurozone economy. 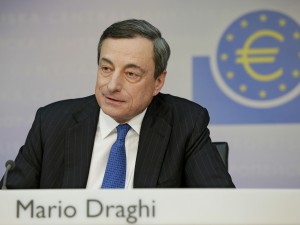 Before the ECB’s announcement, the market already had very high expectation that the ECB would launch a QE package as the Eurozone has entered into deflation (-0.1%) in December 2014, according to the Eurostat official estimate. However, the scale of the bonds-purchase, which will be around €1.1 trillion in total, is much larger than what the market has expected.  Stock markets responded positively to the ECB’s action and the euro has dropped to a new low level.

According to Mario Draghi, the head of ECB, the programme had been taken to address the risks of too prolonged period of low inflation and it will last until a sustained adjustment in the path of inflation. It is also interesting to note that the ECB will only be taking 20% of the risks of the bonds and the remaining 80% of risks will have to be shouldered by the national central banks.