The European Commission has set out its strategy to create a single energy market in Europe, namely the Energy Union. It is one of the top priorities of the political guidelines of the President of the European Commission Jean-Claude Junker who started his term since November last year. He said, “For too long, energy has been exempt from the fundamental freedoms of our Union… This is about Europe acting together, for the long term. I want the energy that underpins our economy to be resilient, reliable, secure and growingly renewable and sustainable.” Currently the EU imports annually €400 billion of energy and its wholesale electricity prices are 30% higher, and wholesale gas prices are over 100% higher than in the US. The EU 2030 climate & energy goals and the current situation in Ukraine further necessitate a more coherent policy on energy. 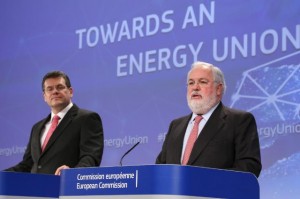 Joint press conference by Maroš Šefčovič, Vice-President of the EC, and Miguel Arias Cañete, Member of the EC, on the strategy of the EC to achieve a resilient Energy Union with a forward-looking climate change policy, Source: European Commission 2015

Harmonization of the European energy market is in no way a simple task. Each EU country has its own energy policy. For example, while France relies on nuclear power generation, Germany is switching from nuclear to renewable energy. The lack of gas and electricity interconnectors among the member states renders it difficult to transfer energy from one country to another.  In addition, there exists significant differentiation of costs and prices of energy across Europe and political willingness for harmonization will be less for those countries in which consumers are enjoying lower energy costs.

Despite these obstacles, President Junker has outlined a comprehensive framework of measures to tackle the underlying problems. First, it aims to reduce the dependence on single suppliers and increase transparency of the energy deals between EU countries and foreign suppliers. Also it outlines measures to redesign the electricity market so that it can be more interconnected more renewable and more responsive. Third, it has a strong focus on enhancing energy efficiency, particularly energy efficiency in buildings. It will further develop EU technological leadership in renewables technology so that it can expand exports and compete globally. It is estimated that an appropriately interconnected European energy grid could save consumers up to €40 billion a year. According to the EU, “in an Energy Union, citizens are at the core. The prices they pay should be affordable and competitive. Energy should be secure and sustainable, with more competition and choice for every consumer.”

For more details of the Energy Union: http://europa.eu/rapid/press-release_MEMO-15-4485_en.htm