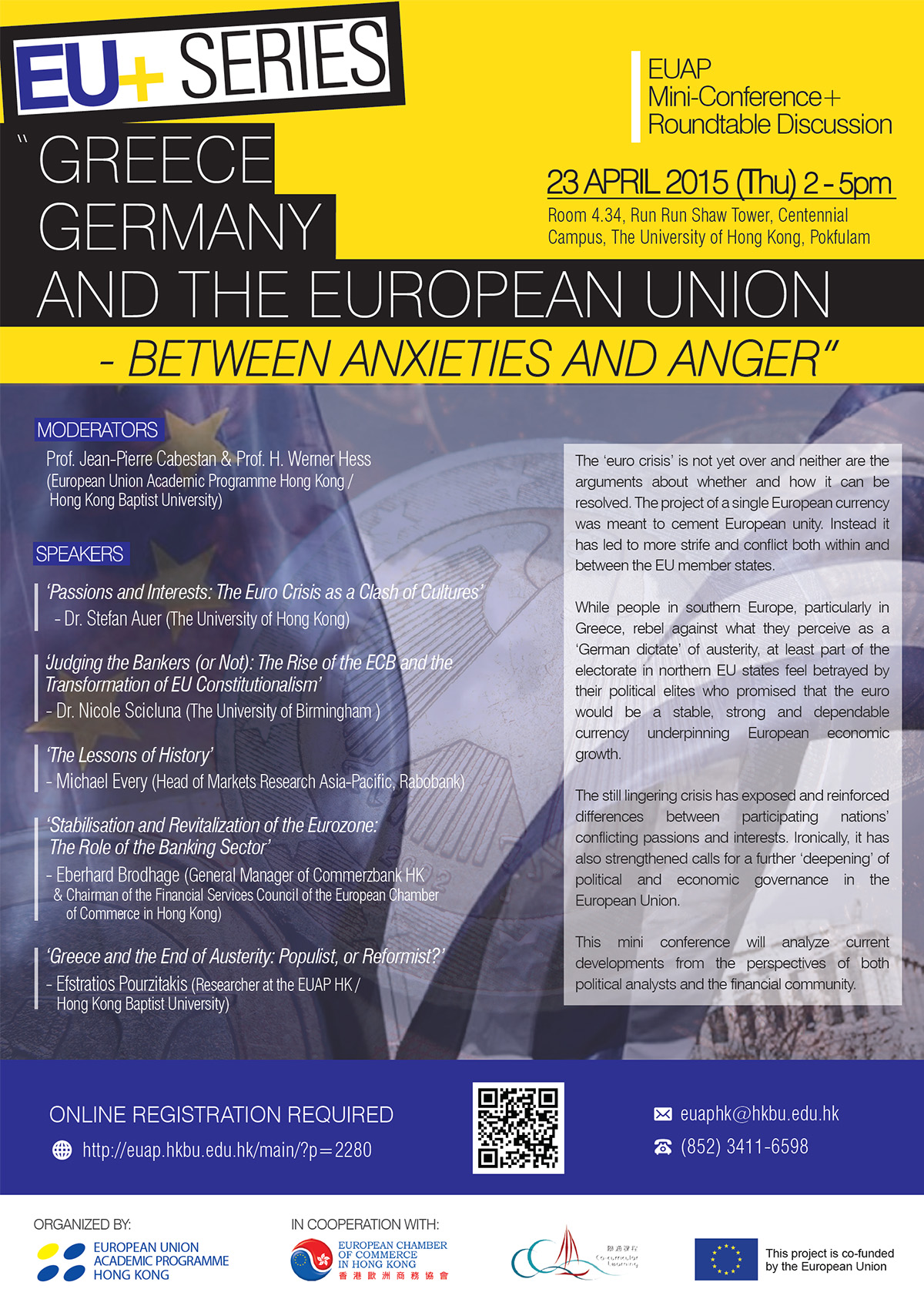 In cooperation with The European Chamber of Commerce in Hong Kong

The ‘euro crisis’ is not yet over and neither are the arguments about whether and how it can be resolved. The project of a single European currency was meant to cement European unity. Instead it has led to more strife and conflict both within and between the EU member states. While people in southern Europe, particularly in Greece, rebel against what they perceive as a ‘German dictate’ of austerity, at least part of the electorate in northern EU states feel betrayed by their political elites who promised that the euro would be a stable, strong and dependable currency underpinning European economic growth. The still lingering crisis has exposed and reinforced differences between participating nations’ conflicting passions and interests. Ironically, it has also strengthened calls for a further ‘deepening’ of political and economic governance in the European Union.

This mini conference will analyze current developments from the perspectives of both political analysts and the financial community.

Rundown of the programme: (updated on 8Apr2015)

Abstract: This presentation will show how differing understandings of the relationship between politics, economics and law have shaped the (mis)management of the crisis, and the challenges this creates for Europe’s future. The EU’s current predicament is as simple to describe as it is impossible to solve: German political preferences are not suited for Europe’s peripheries (which alarmingly include France and Italy), just as Southern European economic priorities are not suited for Germany. ‘German’ Europe might becoming to an end, if we are to believe the promises of the newly elected Greek government, but whatever replaces it is not going to be better. Further clashes are inescapable.

2:25 – 2:35pm   ‘Judging the Bankers (or Not): The Rise of the ECB and the Transformation of EU Constitutionalism’
by Dr. Nicole Scicluna, The University of Birming

Abstract: The European Central Bank (ECB) embodies the politicised technocracy that characterises EU governance. However, its rise is neither uncontested nor uncontroversial. This paper will focus on the ongoing legal dispute over the ECB’s bond buying programme (Outright Monetary Transactions, OMT) that has pitched Germany’s powerful Constitutional Court – which condemned OMT as an impermissible transgression of the ECB’s mandate – against the European Court of Justice – whose Advocate General concluded that the programme is legally sound. The dispute is a synecdoche of the larger economic, political and legal conflicts that threaten to pull the Union apart.

2:35 – 2:45pm   ‘The Lessons of History’
by Michael Every, Head of Markets Research Asia-Pacific, Rabobank

Abstract: The political stand-off between Greece and Germany is taking place against an economic backdrop that has uncomfortable parallels with the very unpleasant periods of recent history. Indeed, it regrettably appears that while ‘history does not repeat itself, it rhymes’ – and it is Germany that is arguably most in need of learning the lessons of history, logic, and mathematics.

2:45 – 2:55pm   ‘Stabilisation and Revitalization of the Eurozone: The Role of the Banking Sector’
by Eberhard Brodhage, General Manager of Commerzbank HK and Chairman of the Financial Services Council of the European Chamber of Commerce in Hong Kong

Abstract: A strong and capable banking system is a necessary precondition of any successful economy. From safeguarding depositors funds, managing their investments, over providing working capital finance to promote growth of SME, to financing global trade, banks are vital to Europe’s continued growth. However, different from the USA, the sovereign debt crisis has held up stabilization of Europe’s banks, and continued “QE” impacts the banks’ recovery. At the same time, the crisis gave rise to the European System of Financial Supervision, namely the EBA, ESMA and EIOPA, which may be instrumental in forging a true European financial services market, delivering substantial future benefit to European consumers and businesses.

4:00 – 4:10pm   ‘Greece and the End of Austerity: Populist, or Reformist?’
by Efstratios Pourzitakis, Researcher at the EUAP/ Hong Kong Baptist University

Abstract: Two months after the election of a new anti-austerity coalition government, Greece faces an uphill struggle due to the dire economic situation and tough negotiations with the country’s creditors. The presentation will explore the strategy of the new government vis-à-vis the ongoing negotiations. Determination to keep Greece in Eurozone has been the driving force behind the recent policy shift by the moderate part of the Greek government. By contrast, support for deep structural reforms is not unanimous among Greeks, while radical voices in the two ruling parties challenge the legitimacy of any agreement that deviates from the pre-election agenda.  Are we witnessing winds of change or the triumph of populism? 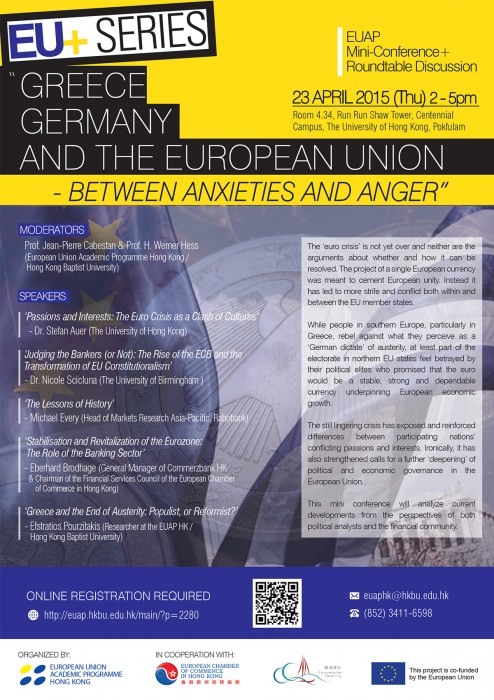