On 25th-26th April 2014, more than 40 students from local universities have joined the 2-day HKMEU conference where they played the roles of Heads of State and Government of the European Union member states to discuss “EU Cyber Security Strategy” in a summit and tried to reach consensus. This was held in co-operation with the European Union Office to Hong Kong and Macao (EUO) in the Council Chamber of HKBU. 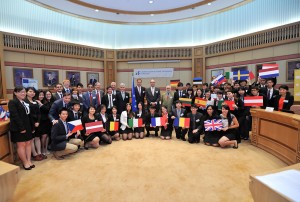 Here are the winners of the HKMEU who have won participation in the EUAP summer programme at EU institutions in Brussels (June 2014). :

Other students with outstanding performances are presented with the following awards:

Congratulations to all of them!

An award ceremony was held by the EUO on 12 May in occasion of the celebration of the Europe Day.

MEU Participants have not only experienced the EU governance mechanisms but also acquired an in-depth understanding of individual level decision-making through acting as Heads of States and ministers. Through organized seminars and trainings they have learnt negotiation and research skills that would enhance their chances of employment in the future.