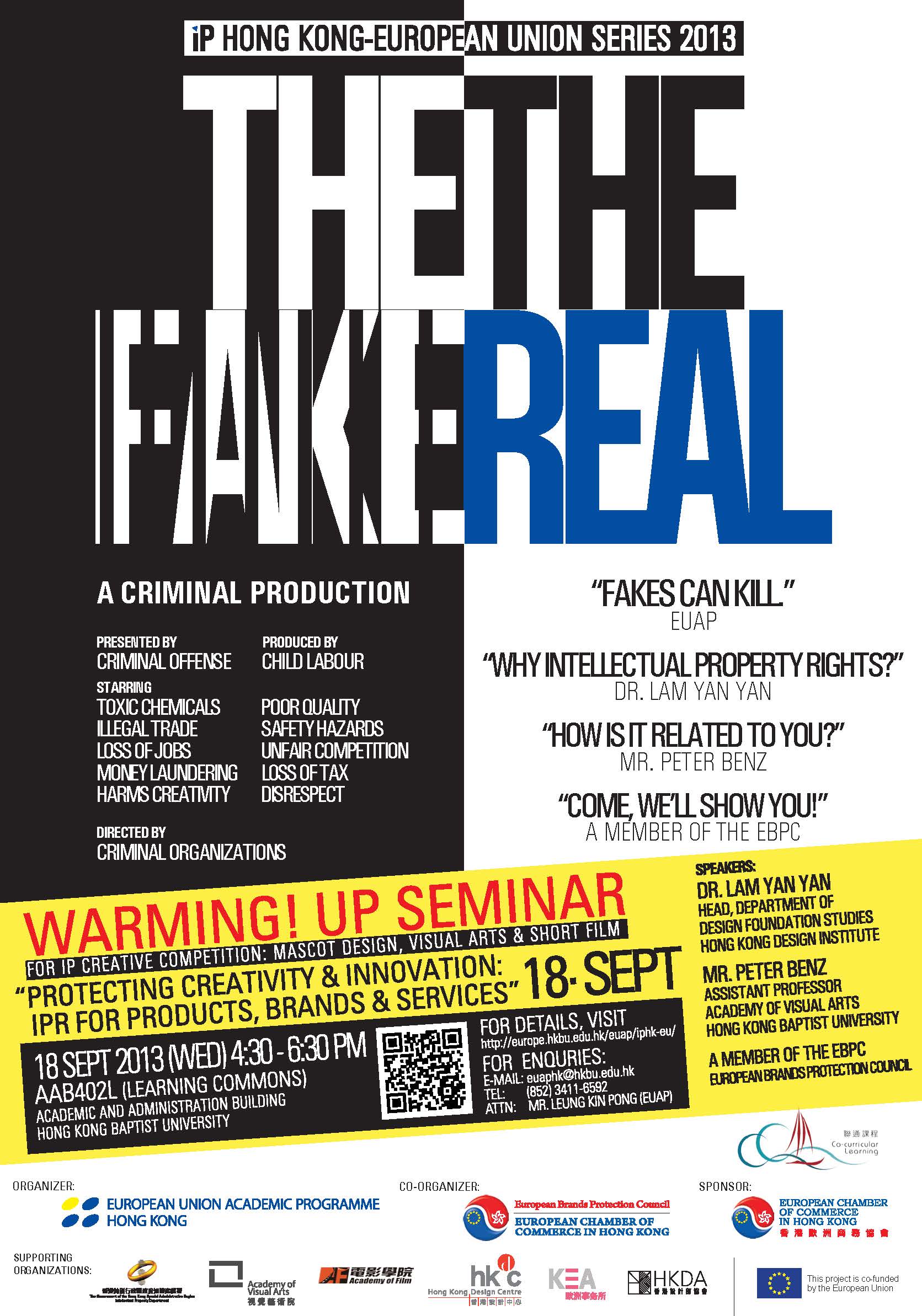 On 18th September 2013, the second seminar of the series IP HK-EU 2013 – “Protecting Creativity & Innovation: Intellectual Property Rights for products, brands and services” warm-up seminar was held at HKBU. More than 100 students, mainly from the design institutions, attended the seminar. 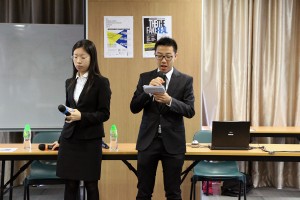 The masters of ceremony, Mr. Christopher IP and Ms. Joscelin YEUNG, both students at Hong Kong Baptist University, started the seminar with the introduction of some basic concept of intellectual property (copyright, designs, trademarks, patents).

Ms. Charlotte Taquet, a member of the European Brands Protection Council and Intellectual Property Officer at Pernod Ricard Asia, together with Ms. Josephine Wong, Luxury Marketing Analyst at Pernod Ricard Asia, gave a presentation on the socio-economic consequences of counterfeiting and shared their experience in fighting counterfeit with some case studies ( “Fleur de Paris” and another example based on a fruitful cooperation with Wuhan enforcement agents). They also gave some useful advices to the audience about how to effectively protect the brands. The presentation was concluded by their focus on Internet e-commerce platforms where counterfeiting is continuously gaining ground. 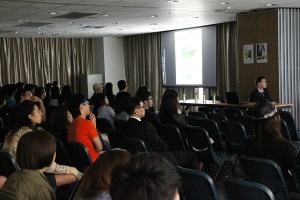 Dr. Emmanuel Gillet, visiting scholar of the EUAP, displayed to students a PowerPoint presentation of the theme anti- counterfeiting, illustrating 10 selected points of negative consequences of counterfeit based on previous anti-counterfeiting awareness campaigns in different jurisdictions.

Mr. Peter Benz, Assistant Professor of the Academy of Visual Arts, presented on the topic of “Intelligent Design”. In addition to sharing his point of view about what intelligent design is, he shared personal experiences illustrating the difficulties in enforcing intellectual property rights and raised the concern of intellectual property enforcement in Hong Kong and in China.

Dr. Lam Yan Yan, Head of Department of Design Foundation Studies, gave an interesting study of the popular Rubber Duck. She encouraged students to be creative so that Hong Kong will have new force and power to sustain the creative industry.

Before introducing the creative competition, Mr. Winnif Pang, ex-chairman of the Hong Kong Designers Association and the Creative Director of Hoobbe Ltd., shared with students his personal experience of not having registered with intellectual property offices a creative product (a cup cap) that has finally been a great success for his competitors who took advantage of this flaw. The loss of revenue due to insufficient intellectual property protection still reminds him of the importance of protecting the design of every product.

At the end of the seminar, the masters of ceremony provided the information about the creative competition, with the theme of raising intellectual property awareness, which will take place from September 2013 to January 2014. It includes the Mascot Design Competition, the Visual Arts Competition and the Short Film Competition.

The IP Mascot Design Competition 2013 ended on 18th October 2013. It attracted 100 entrants from two universities and the HK Design Institute who produced the draft for a mascot on the theme of Protection of Intellectual Property Rights and Creativity. We sincerely thank all participants for their unique and impressive design creations! 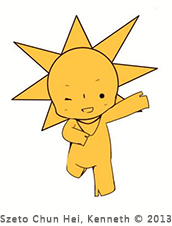 The jury awarded the first price of 15,000 HK$ to Szeto Chun Hei, Kenneth © 2013 of the Academy of Visual Arts at HKBU. Congratulations!
His energetic and passionate figurine “SUN” (or variations thereof) will become the constituent part of all entries in the next two stages of the competition: Visual Arts and Mobile Short Film.

“My Mascot is referring to the Sun. The Sun is unique and so is innovation. No one should take it away from others. The heat from the sun can also represent the passion and energy of creation. Therefore, I think ‘Sun’ is very suitable for my own design. During the design process, I tried a lot of forms. Finally I have chosen the final image of sun. Here is the finished version which is more cartoonish and simplified.

I want to make it more easy to understand and likeable. That is the reason why the design would not be too complicated.
Lastly, I hope this mascot competition can reinforce the importance of creation and intellectual property rights.” 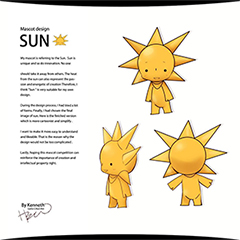 See more photos of the winning entry and its figure>

The jury selected the design of LIN Ling as the first runner-up entry and CHOW Chun Yat’s design as the second runner-up entry. Congratulations to both of you! 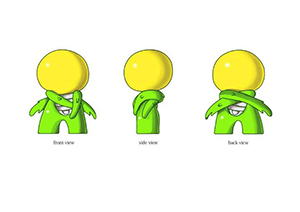 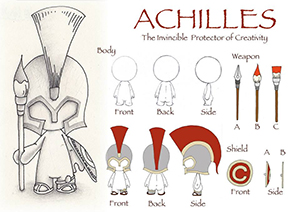 See all entries from the final round selection >

The IP Visual Arts Competition 2013 ended on 30th November 2013. Based on the winning mascot – SUN, participants produced the draft for a piece of visual art on the theme of Protection of Intellectual Property Rights and Creativity. We sincerely thank all participants for their unique and impressive design creations!

The jury awarded the first price of 15,000 HK$ to Tung Sin Ting of the Hong Kong Design Institute. Congratulations! 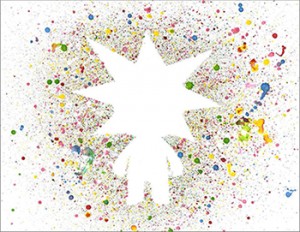 “When the unique design infringed by others, artists and designers will get the feeling which is lost something. Also, it likes something are missing and stolen by others.

I use the mascot image to create the artwork.

Splash 6 different colors spots (red, blue, yellow, green, pink and white) on white drawing paper. These different colors and size spots represent the creations of different artists and designers. The mascot image is missing which expresses our unique creations had infringed by others and related to the feeling of something had stolen by others.

Moreover, I wonder that infringement is an important issue around the world and it will affect each artists and designers. Therefore, we must be careful to prevent infringement happen.”

The jury also awarded the first runner-up to Leung Lee Ka and the second runner-up to Ng King Yiu. Congratulations! 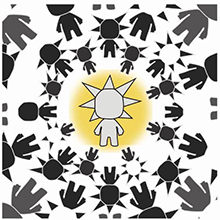 The mobile short films should not be longer than 7 minutes, and they should be full and finished competition entries and be able to use in social media contexts. The mascot (or variations thereof) should also be a constituent part of each entry. Entrants can participate individually or as small-group work with maximum 3 group members.

The IP Short Film Competition 2013 ended in February 2014. We have recevied creative work from both secondary school and tertiary institutes.

The story is about a designer creating a product logo for a Logo Design Competition. She had no inspiration at the beginning so she started off by copying the idea of a renowned logo. In her dream the logo was repeatedly being “robbed”. Then she decided to work on her original idea, which is the Sun (the IPR Mascot). To further protect her precious idea, she decided to register the copyright at the Intellectual Property Department. In fact, the video aims at expressing the idea that an IPR is an effective way to protect a designer’s creation. 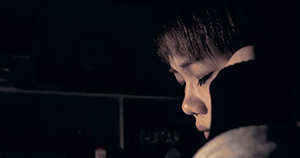 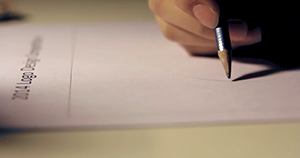 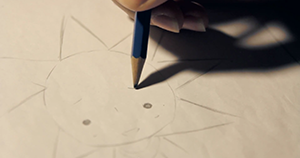 The award ceremony of the IPR Creative Competition took place on 8th May 2014 during the opening session of the International Cooperation to Fight Counterfeiting Conference. More than 180 participants from various customs offices in Asia, brand owners, legal experts and academics from Asia and Europe attended the conference and the ceremony.

The Design Competition of the EU-HK Intellectual Property Series 2013 was co-organized by the European Union Academic Programme Hong Kong and the European Chamber of Commerce in Hong Kong. The competition series took place in 3 stages: Mascot Design, Visual Arts Design and Short Film from September 2013 to February 2014 and more than 130 students took part in the three competitions. The design competition aimed to raise awareness of the need to protect ownership of innovative ideas and products and addressed the potentially damaging socio-economic consequences of IPR infringement.

One of the judges, Mr. Mayank Vaid, Chairman of the European Brands Protection Council, commented that “The different series in this competition are designed to raise awareness and engage the community for IPR Protection in Hong Kong. Many capable students competed in these series and it was not easy to select a winner. Many competition entries left the judges awestruck with the depth of understanding and imagination of students. I hope with such events we can raise awareness amongst the community on the importance of protecting innovation and creativity by means of intellectual property rights protection.”

Thank you for all the good works and efforts of the participants and congratulations to the winners!