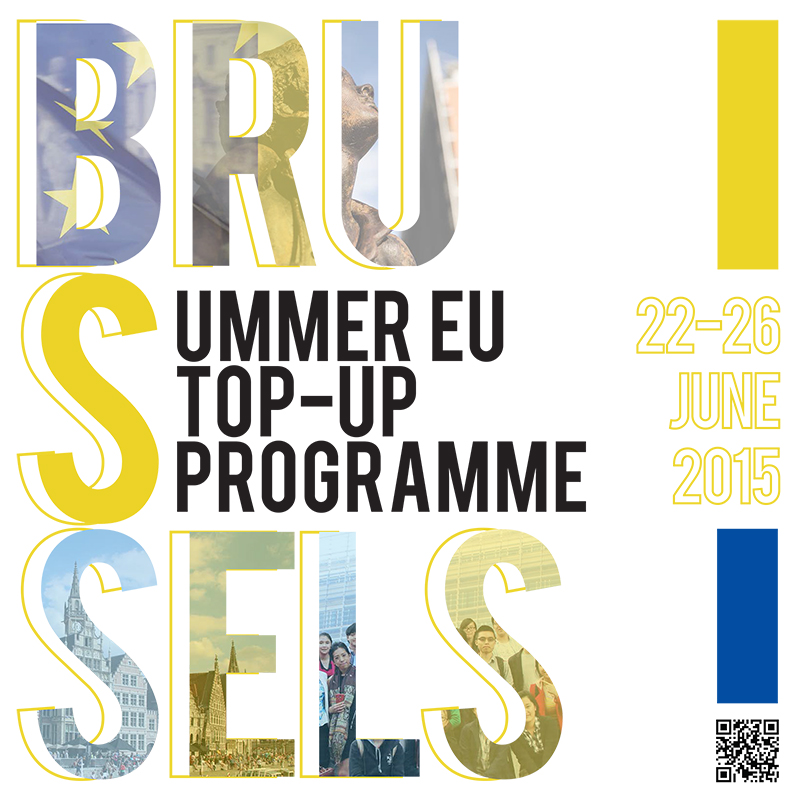 Around 25 students from 3 local universities (Hong Kong Baptist University, the University of Hong Kong and the Chinese University of Hong Kong) with a diverse academic background have joined the programme this year. Throughout the trip they were offered chances to visit the EU institutions, engage in discussion with EU/HK officials and students on various topics. This year the trip also features a visit to Bruges, a World Heritage Site of UNESCO.

Prior to the programme, a briefing session was held to provide basic information of the programme, an introduction on the European Union as well as travel tips. Participants were divided into 7 groups and each was assigned a topic of EU current issues. They were required to gather useful information for their topic during the trip in Brussels and later on submit a group report on their findings. Their reports will be available on the EUAP website shortly. 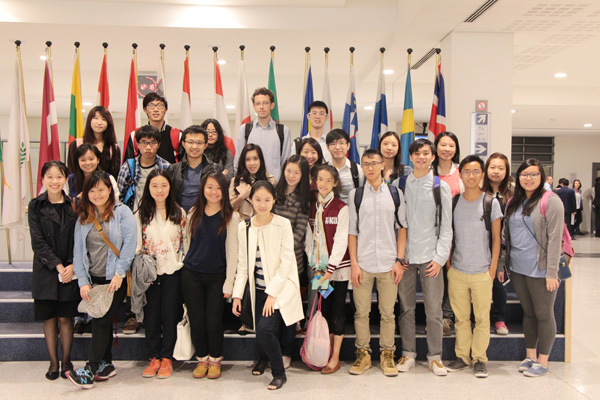 Participants posing together inside the European Parliament

Special highlight this year went to enhanced talent admission measures of the Immigration Department to attract second generation of Chinese Hong Kong permanent residents in European cities who have emigrated overseas to return to Hong Kong for work. Students were interested to know how the HKETO approaches the target groups in Belgium. It is then discussed how the HKETO and the Chinese Embassy differ in their functions and whether their work would be related.

Since HK was put on the list of tax haven by the EU just a few days before the visit, Ms. Drew Lai took the occasion to explain to the students what implication this might have on the HK-EU relationship. 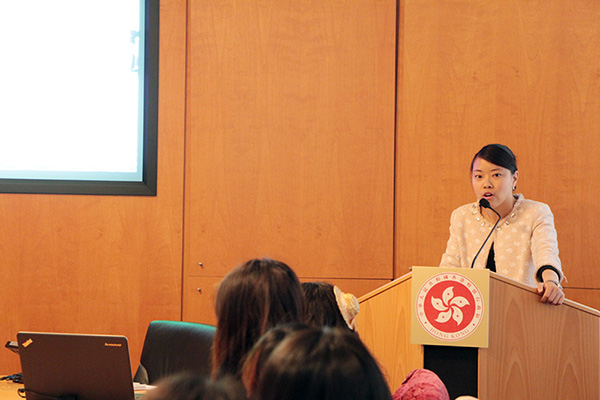 1. The function of the EEAS by Ms. Julia DE CLERCK-SACHSSE, Advisor Public Diplomacy, Strategic Communications Division – EEAS: A brief introduction on the functions of the EEAS, EU’s foreign and security policy service, and how it works together with the other EU institutions is given in detail. It is also discussed how the system of EU and UN are different as well as the reasons for choosing Brussels as the EU capital.

3. Current crisis in the Ukraine by Ms. Anna Korpijaakko, Policy Officer for relations with the Ukraine, Eastern Partnership bilateral Division ?EEAS: A detail account of the issue is given by Ms. Korpijaakko, including the background and the development of the conflict. Students raised questions on how EU viewed the actions of separatists as well as Crimea declaration of independence. 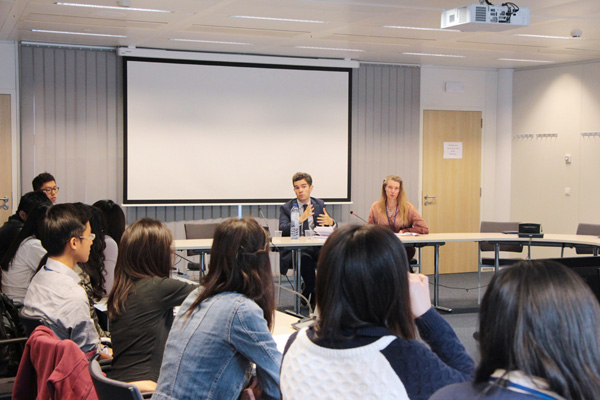 5. EU policies and challenges associated with resolving the Eurozone Crisis by Mr. Alexis YAMAJAKO, Information and Communication Officer, Directorate-General Economic and Financial Affairs – European Commission: Students asked questions about possibility and influence of a Grexit, the UK’s Growing Euro-Skepticism on EU unity, the future of Eurozone, possibility of introducing or attracting new Eurozone member to stabilize the economy etc. It is doubted that whether it would be more efficient to solve the economic problem for example employment on an individual national basis rather than by the EU, which seems to be too bureaucratic for concrete and swift actions. Before Mr. Yamajako answered to the questions one by one, he stressed that the EU member state is interconnected with one another and the importance for them to stay together in time of crisis. As he put it, a crisis could be seen as a means of reinforcement of the union. 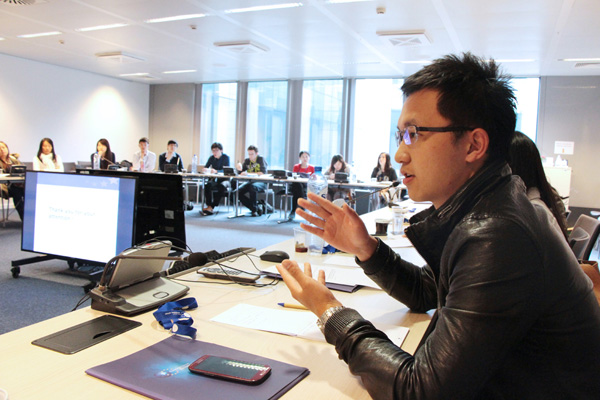 Participant raising question about the Eurozone

A briefing session and guided tour of the Parliament was held?for students. The Information officer first explained the functions and composition of the EU parliament, for example how many seats each member state hold and the different political parties. Then she introduced the work of parliamentarians and the daily operation of the parliament itself.

After the briefing, students went on a tour inside the plenary chamber. The officer explained how the simultaneous interpreters work with one another during the meetings. Some students visited the Parlamentarium after the tour for the history and more details of the Parliament. 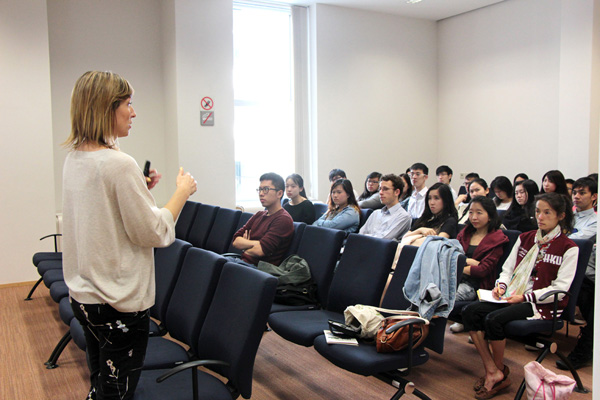 During the briefing session 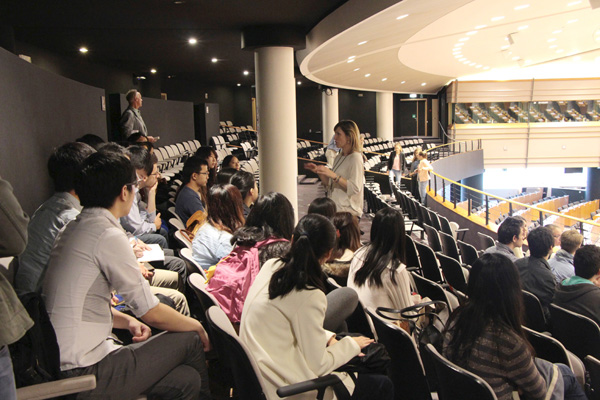 The officer explaining the workflow of the interpreters

Students were encouraged to do sight-seeing and visit different museums around the city of Brussels.

Day 5 (27 th June 2015) – Visit to Bruges
The group travelled to Bruges for a day trip. The 2-hour tour was led by two professional guides by first giving off some geographical information of the city. Students were brought around the heritage city through streets and alleys to learn about the history of different spots and buildings and their special stories behind. They also get to know the challenges citizens of Bruges are facing nowadays. 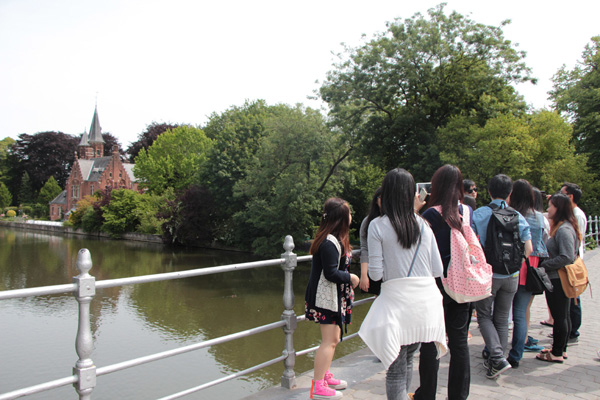 The guide telling the story of “Lake of Love” (Minnewater Lake)