The radical left party Syriza won Greece’s general election on 25 January 2015, getting 149 out of 300 seats in the Parliament, 2 seats short of an absolute majority. It formed a governing coalition with the right-wing party Greek Independents, which won 13 seats in the election and the coalition will have a majority in the new parliament in Greece. Syriza leader Alexis Tsipras was sworn in as the Prime Minister of Greece on 26 January. 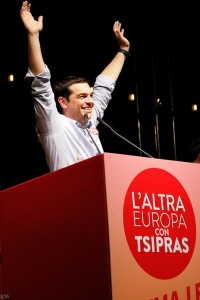 Alexis Tsipras unequivocally declared to end the austerity measures and would renegotiate the bailout terms with international creditors, including a plan to write off half of the Greek debts. He also planned to raise minimum wages and increase social welfare spending. The victory of Syriza showed that their campaign is remarkably appealing to the Greeks who suffered from prolonged economic recession which has led to high unemployment, diminishing living standard and other social problems.

Following the election, the Eurozone as well as international creditors face a dilemma over how to cope with the complex situation in Greece. Whether to grant some concessions to Greece is a very delicate question.  On the one hand, it is not easy to convince their national parliaments to relieve the Greek situation by their respective taxpayers’ money. On the other hand, giving in to Syriza’s demand would embolden the populist parties in various EU countries who claim that their countries should end austerity and eventually quit the Euro.

The financial bailout for Greece will expire on 28 February and it is vital that the new Greek government can reach the agreement with troika in order to receive new funding before the period. It is still highly uncertain how the negotiation between Alexis Tsipras and troika will end up.