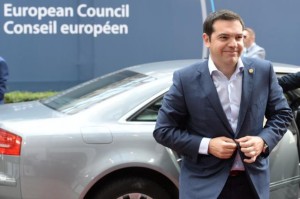 On 26 June 2015, talks between Greek negotiators and Troika (ECB, IMF, EU Commission) abruptly broke up. Following a late-night cabinet meeting, Greek Prime Minister, Alexis Tsipras, went on national television and called a referendum on 5 July in Greece to decide whether the country would accept the bailout terms.  The referendum proposal was approved by the Greek Parliament with 179 votes supporting out of 300. Meanwhile, Greece has applied to extend the deadline of the €1.5 billion loan repayment to the IMF due on 30 June but the demand was rejected by Eurozone finance ministers. The scenario sparked turmoil in financial market in Europe and across the world as the likelihood of reaching a deal is getting less likely.

After the announcement of referendum, there was widespread worry among Greek citizens as queues formed at ATMs for cash withdrawal across Greece. During the past few weeks, large amount of cash has already been withdrawn. The European Central Bank said it would freeze the amount of emergency loans to Greek financial system. In order to avoid massive cash outflow, the Greek government decided to impose capital controls and banks will be close all the week. The dramatic development on the bailout negotiation between Greece and its international creditors sent shock waves worldwide.