The major Greek share index has significantly fallen on Monday and the Athex ended with a drop of more than 16% following a five-week closure due to the Greek government’s emergency capital control and measures to avoid financial collapse. Although the government and its international creditors have agreed a new bailout deal up to €86 billion, the plunge in stock market reflected the anxiety of investors over the long term economic prospect of the country. The banking sector was particularly hard hit as the major banks, Eurobank, Alpha Bank and National Bank has lost more than 28% of its previous value. Meanwhile, the new Greek Finance Minister, Euclid Tsakalotos, who replaced the Yanis Varoufakis after the Greek referendum, said that he was confident the county would reach a new rescue package deal by 20 August. 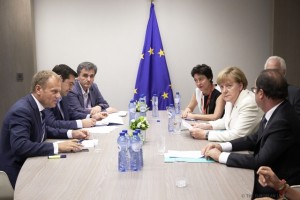