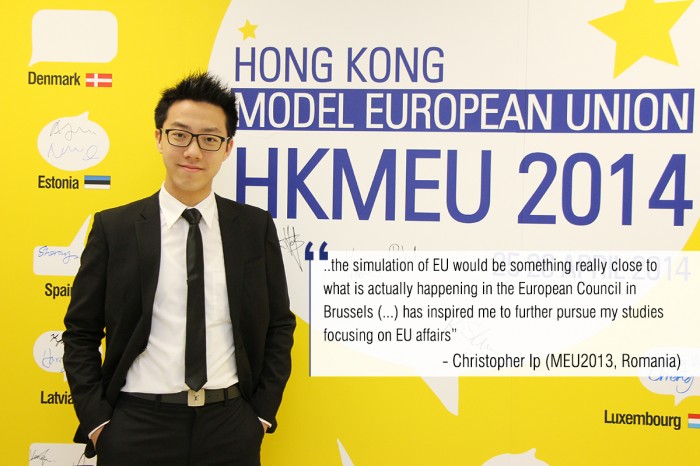 Europe is my passion, my motivation and my interest for the past few years when I have chosen European Studies (French) as my major in Hong Kong Baptist University. Two years ago, I was given an opportunity to join the 1st Hong Kong Model European Union, acting as the Romanian Delegation.  As I have had some experiences on participating in the Model United Nations in Hong Kong, I am always interested in joining conferences, engaging in discussions and political debates on global issues. Therefore, I had decided to sign up for the 1st MEU in Hong Kong. The conference took place at Hong Kong Baptist University; however, what makes it different from other conferences that I have participated is that they had invited the First Counsellor, Head of Political, Press and Information Section of the Office of the European Union, Mr. Asad Beg to chair the conference which means, there is somebody who is really working in the EU, a real diplomat to participate in the event. In other words, the simulation of EU would be something really close to what is actually happening in the European Council in Brussels.

Throughout the conference, I found that negotiation was really tough between member states as different countries have different cultural backgrounds. On the other hand, as a union, we must achieve something and come out with a resolution. At that moment, I have begun to ask myself that how is it possible for Europeans to work together given that they are so different among themselves in terms of their societies and traditions? That has inspired me to further pursue my studies focusing on EU affairs and I have begun to reflect and think whether Asians can do the same among us back home.

In order to find the answer and to discover more about the European Union, I am now in Bordeaux, France as an exchange student in Institut d’études politiques de Bordeaux for one year. During my time in France, I had participated in the Young European Council organized by Young European leadership which is a four days conferences held in the European Parliament in Brussels, Belgium. As an exchange student from France, I was acting as the French delegation discussing on the topic of sustainable development in cities with other Europeans from the other part of the continent. During the four days, I had experienced the EU style negotiation and lobbying which was very intense and exhausting yet fascinating since every member states were trying their best to work together and come out with a solution. That is one of the ideas of unity in diversity which is an important concept of the EU. Furthermore, we were given a chance to have dinner with European officials and I was sitting with Dr. Colette Maloney, Head of Unit Smart Cities and Sustainability unit, European Commission, DG Communications Networks, Content and Technology and we have had a lot of inspiring discussions with her concerning the future of Europe for the whole night. What’s more, I have met many enthusiastic, ambitious and dedicate Europeans throughout my adventure to Brussels.

After Brussels, my passion towards Europe has become stronger than ever and I would love to pursue my career in Europe contributing to European Asian relations by doing a master there after my bachelor degree.