Following the victory of Syriza party in the Greek parliamentary election on 25 January, the first major task of the new government was to come up with an agreement with its international creditors. Both the Prime Minister Alexis Tsipras and the Finance Minister Yanis Varoufakis have been on a charm offensive in an effort to come up with a mutually acceptable solution with European leaders.

Here is a brief summary of the tour: On 30 January, after the meeting between Varoufakis and the Head of Eurogroup Jeroen Dijsselbloem, the Greek Minister clearly stated in the press conference that they would not negotiate with Troika, only with official partners. 2 days later in Paris, French Finance Minister Michel Sapin delivered a more positive note to Greece saying that France would assist Greece with anything that can alleviate the Greek burden, but no question of cancelling any debts. In their subsequent meeting in London, the UK Chancellor of the Exchequer George Osborne warned that the standoff between Greece and Eurozone is the biggest threat to the global economy. 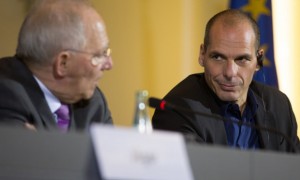 On 3 February, Varoufakis met Italian Minister of Economy and Finance Pier Carlo Padoan and Alexis Tsipras was warmly welcomed by the Italian Prime Minister, Matteo Renzi. While Renzi reiterated his view that Europe must abandon austerity, he called for prudence and responsibility in handling the Greek situation. Although Varoufakis described his meeting with Mario Draghi, President of the European Central Bank (ECB), as constructive, no breakthrough was made. On 5 February, the meeting between Varoufakis and the German Finance Minister Wolfgang Schäuble was not so fruitful. Mr. Schäuble said in the press conference that he and Mr. Varoufakis agreed to disagree over the proposals of the Syriza-led government.

There is so far not any sign that the Eurozone countries are willing to make any compromise concerning the proposals made by the Greek government. On 8 February, Prime Minister Alexis Tsipras, during his address in the Greek Parliament, stated it clearly that Greece would not extend its international bailout and outlined a list of reforms to reverse the austerity measures imposed by troika. The gap between Greece and troika continues to increase and it seems to be more difficult to bridge their differences.  Observers suggest that the following days would be crucial for Greece to come up with an agreement with the creditors, without which the Greek exit of Euro will become a possible scenario.