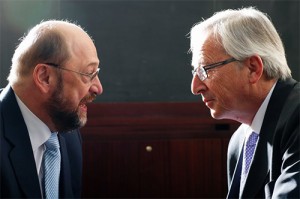 On 9th April the two top candidates for the position of the President of the European Commission, centre-left Martin Schulz of the Party of European Socialists (PES) and centre-right Jean-Claude Juncker of the European Peoples Party (EPP) held the first debate before the elections to the European Parliament in May 2014.

It is the first time that European parties competing for seats in the European Parliament can nominate their own lead candidates. Previously, the role of the Parliament in the process of the President’s appointment was limited to approval of the nominee proposed by the Council. However, according to the Lisbon Treaty which came into force in 2009, the candidate for presidential post has to be chosen taking into account the outcome of the elections to the European Parliament.1

Mr. Schulz has strengthened his position in the European politics being the leader of the Progressive Alliance of Socialists and Democrats group and for the past two years, the President of the European Parliament. Mr. Juncker was the President of the Eurogroup from 2005 to 2013, a forum which consists of regular meetings of the finance ministers from countries in the Eurozone. He also held the office of the Prime Minister of Luxembourg from 1995 to 2013, making him the longest serving head of the government in the EU.
During a live television debate broadcast by France 24 the candidates discussed problems of the Eurozone financial crisis, high unemployment, immigration and the EU foreign policy. Both candidates agreed that the struggle with the economic crisis is not over and the first priority for EU is to reduce unemployment in member states. Mr. Juncker stressed that tight control over the public expenditure should be maintained and claimed that the Euro itself should not be blamed for the crisis. He also stated that he cannot see any reason for France to get another period of extension to reduce its deficit. In response, Mr. Schulz highlighted that the reduction of expenditure is necessary but it must be accompanied by strategic investment in growth and creation of jobs. Moreover, he mentioned that he finds the latest programme of reforms in France courageous and ambitious. In his opinion, French government shall receive support from the European Commission if it is needed.

Both candidates described Germany as the model country for economic achievements. Mr. Schulz emphasized on the way Germany combined budgetary discipline and investment in industry and employment. However, he also noted the German model may not be applicable elsewhere. Therefore, every state has to find its own way towards economic growth.

Regarding free movement of people, Mr. Juncker supported the idea of the EU as a land welcoming immigrants. However he also emphasized that immigration should be well managed and coordinated. He described free movement of people as one of the EU’s fundamental principles which should not be called into question. Mr. Schulz pointed the need for regulations based on the system of legal immigration and protection of refugees. In addition, he called for better distribution of immigrants between member states.

Discussing EU foreign policy, Mr. Juncker commented that the position of Russia towards Ukraine is unacceptable and constitutes flagrant violation of international law. He also added that the situation cannot be ignored by Europe and should be followed by imposition of sanctions by EU. According to Mr. Schulz, Ukraine needs to stay united and choose new legitimate government in national elections. Referring to French military operation against Islamic militants in Mali, both candidates concluded that ‘France saved the honor of Europe’. Mr. Juncker expressed his regret that other member states did not join the intervention. Mr. Schulz stressed the need to enhance the coherence and credibility of EU foreign policy, which still requires unanimous decision by all member states.

Finally, the candidates shared their views on the future of the European Commission.  According to Mr. Juncker, the main focus should be put on major issues, such as growth and employment. Mr. Schulz stated that the Commission has to be more transparent and should integrate citizens into decision-making process.
It is often argued that the appointment of the Commission President is becoming more politicized, as this time the elections are accompanied by pan-European electoral campaigns and TV debates with the participation of major candidates. According to the European Commission, it is necessary to develop better understanding of the European elections among citizens. Therefore, they must be provided with explicit information about affiliation of national parties with European parties and their Commission President candidates. It is expected that this will provoke debate on European level, bring the EU closer to its citizens and thereby increase voter turnout2.

Although the influence of European elections on the appointment of the Commission President fosters political competition between candidates, Article 17(7) of the Lisbon Treaty does not guarantee that the post will undoubtedly go to the candidate from the party most popular in the elections. Among those who strongly support this view is German Chancellor Angela Merkel, who commented that it will require ‘many considerations’ and ‘many discussions’ before choosing appropriate candidates for the most important posts in the EU 3. Therefore, it can be assumed that the nomination of candidate after the elections is strongly subject to negotiations between heads of member states in the European Council.

Watch the Full Debate (in French)