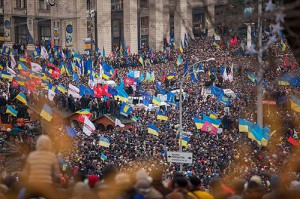 Ukraine, a former soviet republic also the largest country entirely within Europe, borders Russia to the east, Poland to the west. Just as its geographical location, the country is divided into two blocs, the pro-Russia bloc in the East where most people speak Russian and the pro-Europe bloc in the western part of Ukraine where the majority of people speak Ukrainian. The recent protests in Kiev have displayed such difference. The Ukrainian government is led by a pro-Russia president Victor Yanukovych, its official announcement of the withdrawal from the long preparing trade deal with the EU on the 21st November in favor of the closer ties with Russia has sparked off a series of protests led by the opposition supporters, who are mainly pro-Europe and long for a Ukraine which is distance from the Russia.

The association agreement between Ukraine and the EU has started since March 2013. The terms offered by the EU include the facilitation of visa-free travel, the reduction of tariffs and a financial aid that is worth 4 billion U.S dollars. In return, Ukraine has to fulfill a few requirements, including the release of the former Prime Minister Yulia V. Tymoshenko (Yanukovych’s political rival) and introduction of democratic reforms. This agreement is part of EU’s eastern partnership which is launched in 2009. It aims at bringing closer cooperation between the EU and its Eastern European partners–mainly ex-Soviet Union states. Ukraine is particularly important in contributing to the success of this partnership given the importance of its population size. Ukraine’s decision will affect the fate of the remainder of Eastern Europe’s smaller countries, like Moldova, Belarus and Georgia. If such agreement is dealt, it would lay down a benchmark for the EU in further Eastern Expansion and symbolize the extension of the EU’s soft power.

In fact, Ukrainian President Viktor Yanukovych initially has urged the parliament to adopt laws that would fit the EU’s requirements, yet he changed his attitude later. Russia is believed to have imposed pressure on him to drop the plan, The European Commission President José Manuel Barroso said in an occasion: ” The EU will not accept a “veto” by Russia on the bloc’s ties with former Soviet republics’’1 hinting Russia has the maximum liability for the failure of the trade deal. Since August 2013, Russia has changed its custom regulations on Ukrainian imports. Russia’s action is a hard hit for Ukraine as Russia is the major trading partner of Ukraine, as well as the major gas supplier. Similar actions were taken before as a backlash against Ukraine’s pro-western moves, such as the gas dispute in 2009. EU President Herman Van Rompuy also chided Russia for the failure of the trade deal, saying “We will not give in to external pressure, not the least from Russia.”1

Despite continuous protests, the prospect of the government to revise its plan is dimmed with the signing of financial agreement with Russia on 17 December. Yet, the EU did not give up its hope as the European Parliament President Martin Schulz reaffirms that the negotiation door remains open to Ukraine.3