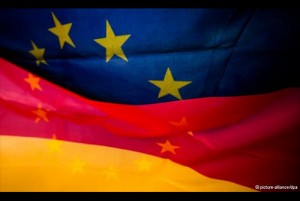 On 22 September 2013, the result of 18th German Bundestag election came out. Angela Merkel’s Christian-Democratic Union (CDU) won 41.5%, the highest score in 23 years – leaving it just a few seats short of an absolute majority in the Bundestag. It marked the coming of her historic 3rd term. The only uncertainty now is which party can be her coalition partner.

According to the constitution, the party who wins over 50% of the vote will win an absolute majority. However, no single party can attract that much support since 1949, except the 3rd Germany federal election in 1957. As a result, main parties normally seek coalition with the parties with close political positions. In addition, there is also a minimum threshold vote that a party must either win 5 percent of the vote in order to get into Bundestag.
The Free Democratic Party (FDP), the old coalition partner of CDU, fell short of the five-percent threshold for the first time since 1949. As a result, only 4 parties successfully entered the Bundestag: the conservative CDU (“black”), the center-left SPD (“yellow”), the far-left Die Linke and the center-left Greens. Moreover, Die Linke is unlikely to form coalitions with any other parties due to its ties to the former East Germany’s Communist Party, so the so called “black-yellow” grand coalition or the “black-green” grand coalition could be the choice.

As these parties have some different positions on issues regarding the EU, thus the uncertain coalition possibilities will influence Germany’s future policies on the EU.

Some European politicians and scholars believes that no matter who the partner of CDU’s grand coalition will be, Germany’s is probably to shift towards a milder austerity policy for the crisis countries due to the criticisms on former austerity policies both from the center-left SPD and the Greens. In contrast, others argued Angela Merkel’s victory somewhat shows domestic support on current economic reforms across the eurozone which could mean even swifter and rougher actions regarding the Euro in the future.

Table of stances of major political parties on EU-related issues

Source: The federal Returning Office of Germany “Provisional result of the Election to the German Bundestag 2013”