On 31st January, more than 100,000 supporters participated in a mass rally in Madrid organized by Podemos, a Spanish radical left party. The so-called “March for Change” rally is the first mass rally held by the party, following the recent victory of the Syriza party in the Greek general election on 25th January. Both parties share a similar ideology that their own country should put an end to the austerity policies implemented by the mainstream politicians. The leader of Podemos, Pablo Iglesias said during the rally that a “wind of change” was starting to blow through Europe.

Podemos, meaning “We can” in English, was founded by Pablo Iglesias, who was previously a university lecturer and is a television presenter. It came as an aftermath of the Indignados movement in 2011 against inequality and corruption in Spain.  In January 2014, the party was officially established with a manifesto signed by a number of intellectuals and personalities in Spain. Given the background of high unemployment in the country, especially among the Spanish youth adults and its effective social media platform, the party has risen in popularity within a very short people of time. There were 100,000 people signing up as members within the first 20 days since its establishment and it is currently the second largest party in Spain in terms of the number of members, 344, 000. In the 2014 European Parliament Election, the party gained five seats out of 54. Pablo Iglesias stated that the objective of the party would be to throw the mainstream political parties (PP and PSOE) out of power and they would work with other parties of Southern Europe to end austerity and redefine sovereignty. 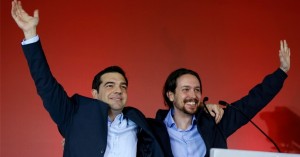 According to the recent opinion poll, Podemos would win 24 percent of vote in the next general election at the end of 2015, making it the second largest party behind the ruling Popular Party of the current Prime Minister Mariano Rajoy. The figure was only 15.3 percent in July last year. The phenomenal rise of Podemos is threatening the traditional parties in Spain. Although it is expected that the Spanish economy will rebound this year, the long-lasting high unemployment rate will continue to add fuel to the popularity of Podemos. In October 2014, the party decided not to participate directly in the municipal elections in May this year but to support the grassroots local candidates, for example the Guanyem Barcelona, a social movement in Barcelona emphasizing citizen participation.

In the European context, the outcome of the negotiation between the new Greek Syriza led government and its European partners will have some direct impact on parties like Podemos, National Front in France and Five Star Movement in Italy. All these parties share the anti-establishment and anti-austerity ideology as the Syriza in Greece. From this perspective, it explains somehow why the European countries have to take into account the rising populism at home when negotiating with Greece.