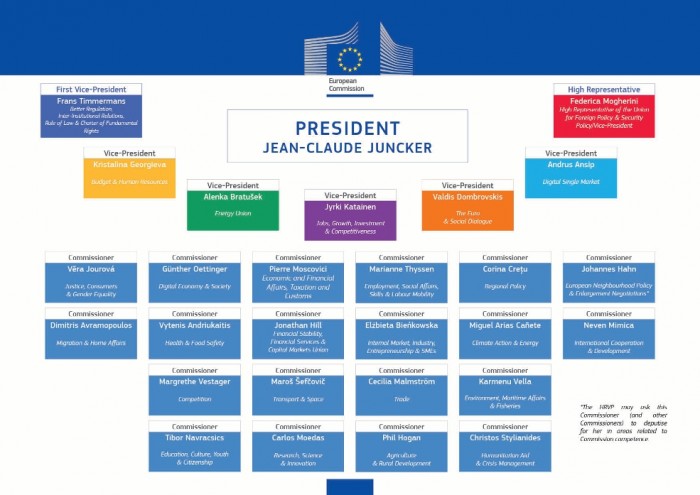 President-elect Jean-Claude Juncker has finally unveiled his team and presented the new organizational structure of the European Commission, the EU executive body. Commissioners’ portfolios have been allocated after months of negotiations and strong lobbying from EU member states. The new shape of the Commission is an innovative proposal which reveals ambitions to reinvigorate the way the EU handles ongoing problems.  As the EU is currently going through the time of economic and political hardship, the Commission will have to put great effort in drafting the new agenda and setting up long-term goals.

The composition and the new structure

The new Commission is likely to be more decentralized as more power will be shifted from the President to his deputies. A special position has been given to Frans Timmermans who will be the First Vice-President and the right-hand of Juncker. Among other responsibilities, the seven vice-presidents will coordinate the work of commissioners. They will also be able to reject legislative proposals.[1] Each vice-president will lead a project team the composition of which will be subject to change over time. This new solution will allow for more flexibility and better collaborative framework crossing different areas of responsibility.

After the negotiations with EU member states more female Commissioners were proposed by the governments.  The representation of women in Juncker’s Commission constitutes 33% and stays on the same level as in the 2nd Barroso Commission.[2] It responds to the expectations from the European Parliament which called for maintenance of the gender balance in the Commission. Although the number of male commissioners remains higher, Jean-Claude Juncker fulfilled his promise to compensate women with weightier portfolios. The new EU’s High Representative Federica Mogherini, Kristalina Georgieva and Alenka Bratusek will be the three out of seven vice-presidents.

The composition of Juncker’s team makes the Commission highly political. Most of the new members have extensive political experience in their national governments. Among the new commissioners there are prime ministers, deputy prime ministers, ministers, former members of the Commission and the European Parliament. However, it is expected that the commissioners will stay neutral toward their national interests, taking responsibility on the EU level. Juncker highlighted this requirement saying that he ‘has given portfolios to people – not to countries’.[3]

The need for change

Presenting his new team Juncker made it clear that the main objective of the new Commission is to ‘give Europe the new start’.   The emphasis on the openness for change reflects the urgency of response to the current challenges and to the expectations of European citizens.  The EU needs to enhance its legitimacy and reinforce the belief that the problems must be addressed through cooperative framework at the EU level. The effectiveness of the Commission in the coming five years will help to regain the trust of the citizens, which diminishes over the years. The lack of conviction that European institutions are responsive to citizens’ grievances results in continuously declining turnout in the European elections. The rate for the 2014 elections is the lowest since the first elections in 1979.[4] The new Commission has to devote all the efforts to convince voters that Europe can effectively implement reforms and strive for its goals. The distribution of the portfolios corresponds with the strategic priorities of the EU.

The economy remains the top priority

A glance over the portfolios and agendas gives a clear impression that the emphasis is given to the revival of sluggish economy. The Eurozone crisis resulted in high discontent over economic stagnation, the effects of severe austerity measures and unemployment. Juncker’s team will thus see the economy as the main challenge with growth and jobs creation as the top objectives.

Important economic portfolios have been allocated to the UK and France. The nomination of British commissioner Lord Hill for the top financial post is believed to be a strategic gesture to appease British Prime Minister David Cameron, a strong opponent of Juncker’s appointment as the Commission president. It is also seen as a part of a bargain to keep the UK in the EU, in the face of increasing appeal of Eurosceptic views in the country. Pierre Moscovici, heavily lobbied by France, was nominated as the commissioner for economic affairs. However his plans for reforms and criticism of cuts in government expenditure may go unheard. Moscovici will be balanced by two vice-presidents, former prime ministers Jyrki Katainen of Finland and Latvia’s Valdis Dombrovskis which will oversee the adoption of economic policies. Both of the vice-presidents are known to prefer austerity-led economic recovery. [5]

Climate change and the energy security

The environmental protection and the fight against climate change are seen as the biggest victims of the new arrangement. While the Commission program is greatly dominated by the economic development, the environmental groups and some of the members of the European Parliament express their worries that environmental issues will be relegated in the list of EU’s priorities. Moreover, the climate action and energy portfolios will be merged and handled by only one commissioner. To NGOs it is a signal that the energy security is likely to play a leading role in the debate. These concerns are augmented by the allocation of the post to Spain’s agriculture minister Miguel Arias Cañete. His shares in an oil company and Spanish government’s decision to curb subsidies for renewables make him an unacceptable candidate in the eyes of green groups.[6] Regardless of the voices of skepticism, the EU defends the changes and explains that the two areas are interconnected and must go hand in hand to enhance policy coherence.

Recent Ukraine crisis reinforced the link between the politics and the energy security.  Russia’s and the EU’s energy interdependency is now overshadowed by unclear future of deepening sanctions. In the risk of disturbances in oil and gas supplies to Europe, the EU recognizes an urgent need to diversify its energy sources. In Juncker’s Commission the energy dossier is covered by a separate portfolio. The creation of the EU Energy Union aiming at increase in energy independence, share of renewables and energy efficiency will be overseen by the vice-president Alenka Bratusek.[7] She will also have to take into account the targets of the 2030 policy framework.[8]

The confrontation with Russia is also a challenging task for the new High Representative Federica Mogherini and the Commissioner for the European Neighbourhood and Enlargement Negotiations, Johannes Hahn. The EU will not accept any new members in the next five years; therefore the main focus will shift toward consolidating EU’s cooperation with its Southern and Eastern neighbours, as well as promoting stability and prosperity at EU’s borders. Unstable situation in Ukraine, partnership with Africa and enlargement negotiations with Western Balkans are among the key issues.

A challenging task is also ahead of the new Commissioner for Migration and Home Affairs, Dimitris Avramopoulos. He will work on refining the EU migration policy and tackling problems of the illegal immigration and asylum seekers. The number of migrants who illegally entered the EU between 2012 and 2013 has increased by 48%.[9] Illegal border-crossing, especially by migrants from Syria and North Africa, is therefore seen as a serious humanitarian and economic challenge.

In addition to political and humanitarian issues, the Commission has to strongly focus on the economic aspects of foreign relations. The leading topic in external trade agreements will be the Transatlantic Trade and Investment Partnership with the United States. Despite the expected increase in trade and economic growth, due to concerns over such issues as food safety, data protection and Investor-state Dispute Settlement the agreement remains a subject of controversy. The negotiations over the trade pact will be handled by Cecilia Malmström, the Commissioner for Trade.

Structural changes and the creation of new portfolios gave rise to a debate over possible overlap of competences between different posts within same policy areas. Several commissioners are assigned to work on the economy, finance and the internal market. Representing various political groups they are likely to present contrasting opinions on the matter. Other issues like digital agenda, energy and environment will be handled by more than one commissioner sharing similar responsibilities (for instance Andrus Ansip, Commissioner for Digital Single Market and Günther Oettinger, Commissioner for Digital Economy and Society). Thus it can be argued that in the case they work is not well coordinated and harmonized, the policy making process risks being hindered by inconsistencies. Nevertheless, it may just as well have an opposite effect enhancing cooperation and emphasizing the importance of consensus.[10]

The next step for the Juncker’s Commission is to get an approval from the European Parliament. The decision will be preceded by hearings of Commissioners-designate in front of the parliamentary committees. MEPs will have a chance to get to know more about the candidates and voice out their concerns about their suitability for the particular portfolios. The Parliament will then vote on the entire College of Commissioners.

The restructured Commission, although full of uncertainty, opens new opportunities to comprehensively deal with all the complexities of the EU internal and external affairs. Many of the issues that have to be addressed are multi-dimensional and include various aspects of EU activities. Flexible and well-coordinated cooperation between commissioners will definitely be an essential prerequisite to move closer toward Europe’s goals.

[6] The climate: biggest loser of the new Commission? (2014, Sep 12), http://www.euractiv.com/sections/climate-environment/climate-biggest-loser-new-commission-308420