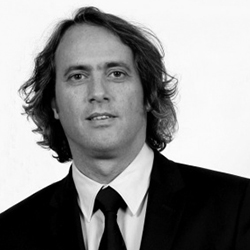 Born in Argentina, he obtains his architecture degree in the National University of La Plata. In 1985, he settles in Barcelona where he attended doctorate courses in the Escuela Técnica Superior de Arquitectura de Barcelona (ETSAB).

In 1996, after collaborating with Arata Isozaki Studio on the Palau Sant Jordi project and, afterwards, with Emilio Donato, he founded his independent professional studio in Barcelona, Willy Müller Architects.

In 1997, he founded and directed Metapolis group, along with Vicente Guallart and Manuel Gausa, which in 2000 evolved to Metapolis Institute for Advanced Architecture and its Master Research Program.

In 2010, he obtained the Property Award 2010, in London, for Best European Public Services Building for his project of MercaBarna Flor.

From 2006 to 2011, he developed several urban scale projects such as Dream City in the Dominican Republic, Victoria Bay in Brazil or Blau@Ictinea in Barcelona.

In 2006, a monograph concerning his works in Korea was published, DD Series number 11, Occupying Structures, WMA, with an introduction written by the ex-president of the International Union of Architects, Jaime Lerner.

In September 2011, he became the CEO of Barcelona Regional, Metropolitan Agency for Urban Development and Infrastructures.