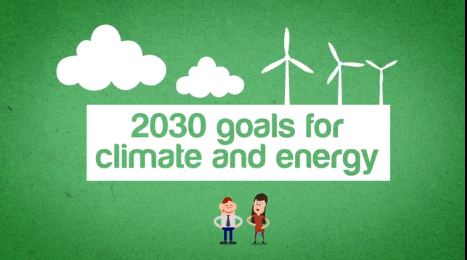 Over the past centuries and especially in recent decades, the global temperature has increased significantly. According to the United Nations Intergovernmental Panel on Climate Change’s report, if the global temperature rises further by 2°C, the earth will most likely suffer from an irreversibly destructive ecological change. Experts warn that our current measures are far from enough to prevent the 2°C temperature rise. At the end of this century, the earth may even become 4°C to 6°C warmer.

Coping with climate change effectively needs the involvement of all countries around the world. In Europe where dozens of small and large countries are scattered over, the EU as a supranational organization with 28 member states plays an important role of coordination. Below we will give an outline of the EU policy concerning climate change. Concrete examples can be found in (2) and (3) of this series.

In regard to climate change, the EU has set three targets to be achieved by 2020:

The first two targets are law-binding. But targets can vary according to each country’s situation. In technologically advanced countries like Sweden, for example, the target for renewables is set at 49% whereas in Malta only 10% of renewable energy sources are required. Overall, all EU member states are heading to the same direction to achieve targets (1) and (2).

In the long run, the EU aims to reduce 80% to 95% of its greenhouse gas emissions (compared to the 1990 level) and generate electricity without emitting carbon dioxide.

Launched in 2005, the EU Emissions Trading System is the first and still by far the largest international system for trading greenhouse gas emission allowances. Participants include all EU member states, Iceland, Liechtenstein and Norway. The rationale behind the ETS is to use government regulations with the help of the market’s invisible hand to seek the most cost-effective means to reduce greenhouse gas emissions. So how does it work?

Even if we can stop emitting greenhouse gases right now, we still have bear the consequences of our previous unlimited emissions. Experts warn that the weather is becoming more unstable and extreme. Because of that, the EU has set up the European Climate Adaptation Platform to study what measures can be carried out to minimize the impact of climate change and how one can make the best of it.

While the ETS concerns only energy intensive industries which make up of 45% of total greenhouse gas emissions in the EU, other measures are needed to combat the other 55% attributed mainly to transport, construction and agriculture sectors. Here are some of the measures: