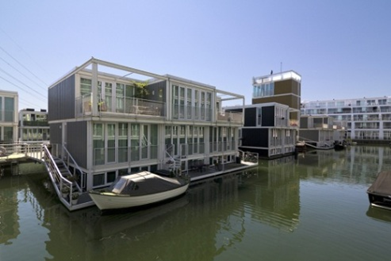 Below we will show you a number of case studies of how architecture can help people cope with climate change.

The Netherlands as a low-lying country with around one forth of its land below sea level is very susceptible to floods. Experts warn that by the next century the sea level can further increase by 1.3 metres due to ice melting in the Arctic, threatening the country than ever before. So what should be done? Apart from building dams, the Dutch have come up with an innovative idea, namely houses that can rise or fall according to sea level!

Due to climate change, it is likely that some regions in the world are going to have more intense rainfall. Whether or not a disaster will eventually happen depends very much on a city’s capacity to carry away rainwater. In a populous city where land is scare, finding spaces to store excessive rainwater for gradual discharge can be especially difficult. In Rotterdam, a new solution is found. The Watersquare Benthemplein, completed in 2013, is nothing more than a public area for leisure and entertainment on normal days. But on rainy days, the basin-like Watersquare can store as much as 170,000 litres of water (equivalent to 8,500 bathtubs), thus releasing the pressure of the drainage system and reducing the immediate threat of flooding.

The Netherlands’ ecoducts and underpasses

The core idea of sustainability is to live with the environment in harmony. In the Netherlands there are around 600 ecoducts and underpasses which serve as bridges to connect ecological regions previously cut apart by highways. The purpose behind is to minimize the impact of human activities on the environment by letting animals living nearby to move as safely as they used to.

The idea of passive energy saving can be applied to offices and apartments as well. On top is a passive apartment with 354 units in Innsbruck, Austria. Source: Pass-Net：http://www.pass-net.net/

Passive house is a green building concept. The characteristics of a passive house are its  construction materials (e.g. insulation) and ventilation system which help keep the indoor temperature at a pleasant level without relying on any air-conditioners in summer or heaters in winter. Compared with a conventional house, a passive house is 80-90% less energy-consuming. The first passive house was built in Darmstadt in 1990. Houses of the same origin can now be found in many places all over the world.

Edgware Road Railway Station: before and after the installation. Source: Transport for London

Land in Hong Kong is very expensive. Buildings have been constructed as densely as possible and only very few green spaces are left in urban centres. They are very favorable conditions for the urban heat island effect. In London, to reduce the urban heat island effect, the city is planting vegetation on buildings’ roofs and walls because vegetation can absorb CO2 and more than 70% of rainwater.

Sandbags are usually the first line of defense against flooding. But are they really the best means? They are heavy and require much manpower. Besides, they are easily destructible and can be used in most cases once only. A company based in the UK has invented a new kind of water barriers called “Floodstop”. Have a look at how it works: