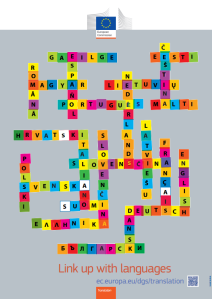 Integration should and can coexist with multiculturalism. In fact, “United in Diversity” is the motto of the EU. How does it mean in practice? Let’s have a look at the example below.

The EU has 28 member states speaking 24 different languages. It requires all official documents to be translated into these 24 languages. And if a EU citizen makes a written inquiry to the EU, the EU must reply in his/her national language.

Do you know which language is the most widely spoken mother tongue in the EU? (Answer at bottom) Source: EU

Have you ever heard of Esperanto? It was an artificial language invented by a Polish chemist named L.L. Zamenhof at the end of the 19th century. It contains elements of various European languages but with much more simplified grammar. The objective is to make it easy enough for different nationals to pick up the language as quickly as possible. That way, it is hoped that they can have better communication and less conflict with each other.