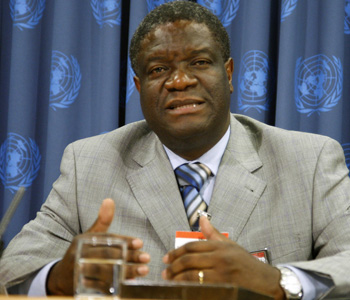 Denis Mukwege is the laureate of the Sakharov Prize for Freedom of Thought 2014, following the decision by European Parliament President Martin Schulz and the political group leaders. Mukwege will be invited to Strasbourg on 26 November to receive the award during the plenary session.

Announcing Mukwege as the 2014 laureate, President Schulz said: “The Conference of Presidents decided unanimously to award Dr Denis Mukwege from Democratic Republic of Congo the Sakharov Prize for his fight for protection especially of women. However, the political groups recognise the important role played by EuroMaidan in Ukraine and thus want to invite its representatives to join the award ceremony in November.” The gynaecologist standing up for women´s rights

In many armed conflicts around the world, rape is used as a weapon of war, but Mukwege decided to help victims in his country. The 59-year-old gynaecologist founded the Panzi Hospital in Bukavu in 1998, when a war took place in the Democratic Republic of Congo, where today he still treats victims of sexual violence who have sustained serious injuries.

The war in DRC might be officially over, but the armed conflict still continues in the eastern part of the country and so do attacks against civilians, including gang rapes. Despite travelling regularly abroad to advocate women’s rights and managing Panzi Hospital, Mukwege continues to see patients and perform surgery two days a week. He was nominated by the S&D and ALDE groups and MEP Barbara Lochbihler.

The Sakharov Prize for Freedom of Thought is awarded each year by the European Parliament. It was set up in 1988 to honour individuals and organisations defending human rights and fundamental freedoms. Last year the prize was awarded to Malala Yousafzaï, the Pakistani campaigner for girls’ education.