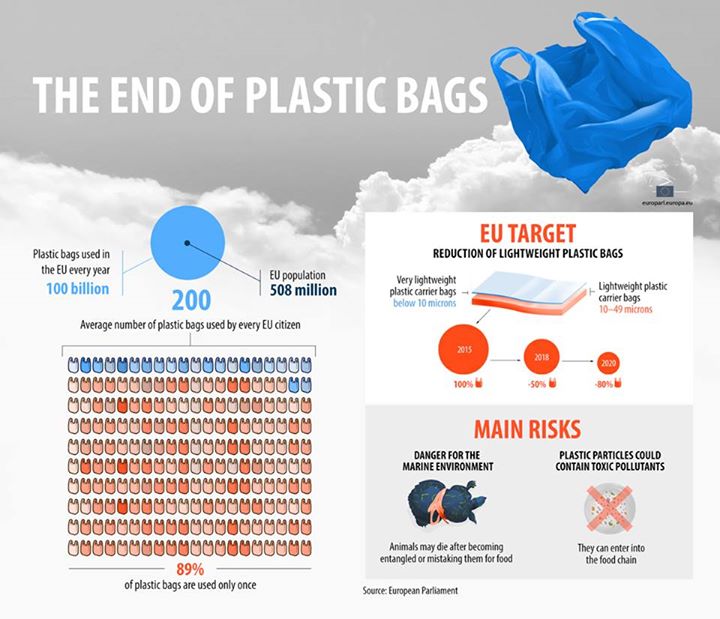 Plastic bags are a major source of pollution, but also a threat to wildlife on a global scale. The EU wants to stop this. On Tuesday 28 April Members of the European Parliament debated and voted on new rules to limit the use of lightweight plastic bags.

On average every European uses 200 plastic bags a year and 89% of these bags are used only once. Under the new rules EU countries would be required to choose between two approaches to reduce the use of lightweight plastic bags:

As a comparison to Hong Kong, before the implementation of the charging for plastic bags in 2009, on average every Hong Kong citizen uses a staggering 1100 plastic bags a year (compared with 200 in Europe).  As the charging scheme for plastic bags was introduced, we have seen a 90% drop in plastic bag give-outs from the retail industry in 2010, yet in the two years following, the income of the taxes levied by the government increased once again.  In 2010 and 2011, this figure stood at HKD26 million, in 2012 it grew to HKD30 million, and in 2013 HKD35 million.  The total number of plastic bags used went up from 50 million in 2010, to 66 million in 2014.  This leads us to think, does it partly have something to do with the low cost of charges, or have the habits of Hong Kong citizens never changed?  Perhaps, with the full implementation of the plastic shopping bags charging scheme coming into force on 1st April 2015 (which has become even stricter since 1st May 2015), hopefully it will bring about more positive change to Hong Kong.  Let’s observe for some time to see whether there has been any further effects on people’s shopping and lifestyle behaviours.  What are your thoughts?