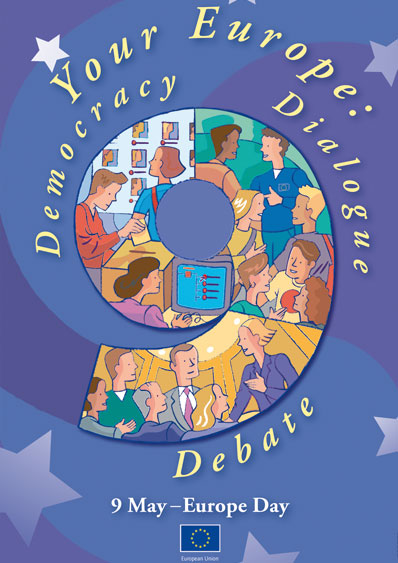 This is a day dedicated to, and in celebration of peace and unity in Europe.  In fact, there are two separate designations of Europe Day: today, 5 May, is for the Council of Europe (established in 1949), and 9 May is for the European Union.  For the EU, the day is also known as Schuman Day, marking the anniversary of the so-called “Schuman Declaration” signed in 1950, as the first move towards the creation of the European Union.  Europe Day is one of a number of European symbols designed to foster unity among Europeans, attempting to teach citizens about the EU and promoting the process of European integration.

Celebrations in Berlin in 2011

Why a Europe Day?

At a speech in Paris in 1950, the French foreign minister, Robert Schuman, set out his idea for a new form of political cooperation in Europe, which would make war between Europe’s nations unthinkable.

His vision was to create a European institution that would pool and manage coal and steel production. A treaty creating such a body was signed just under a year later. Schuman’s proposal is considered to be the beginning of what is now the European Union.

Although 9 May is more well known as the Europe Day in EU, 5 May is still observed by some Europeans due to the Council’s role in seeking to defend human rights, parliamentary democracy, and the rule of law – all of which are the core values of the EU. The Flag of EU deployed in Strasbourg, France , 2009

Local EU offices in Europe and all over the world, including Hong Kong, organise a variety of activities and events for all ages. Many of the Consulate Generals in Hong Kong also join the celebrations!

Each year thousands of people take part in visits, debates, concerts and other events to mark the day and raise awareness about the EU. If you were to be in an EU state during the day, you can be guaranteed to be treated to some spectacular festivities! And finally, here are some posters for Europe Day from the past three years:

Europe Day around the world – http://eeas.europa.eu/europe-day/index_en.htm