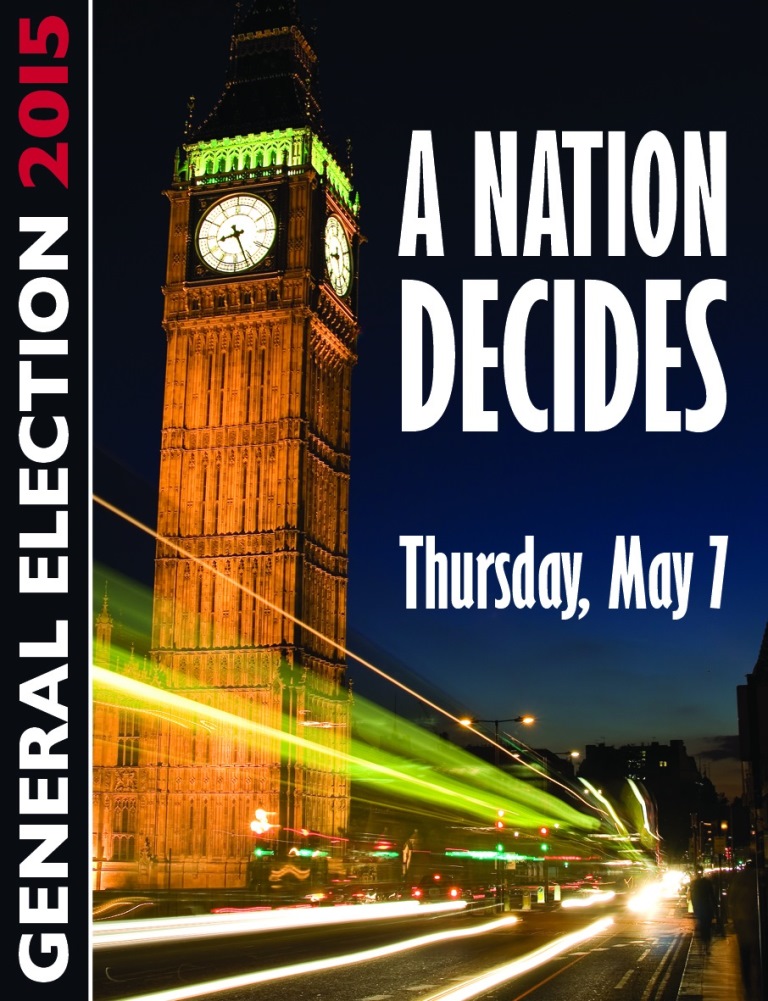 The 7th May 2015 is the General Election in the United Kingdom, a big day for the second largest member of the European Union in terms of population, and also for a nation with the oldest parliament in the world.  This looks to be the tightest race in recent decades for the country. Let’s have a look at how it all works!

The polling day takes place where nearly all UK, Commonwealth and Irish citizens resident in the UK and over the age of 18 have the right to vote. However, the Queen never votes. As the head of the state she must remain politically neutral, and so it would be considered unconstitutional for her to vote in a general election. This also applies to the royal family! 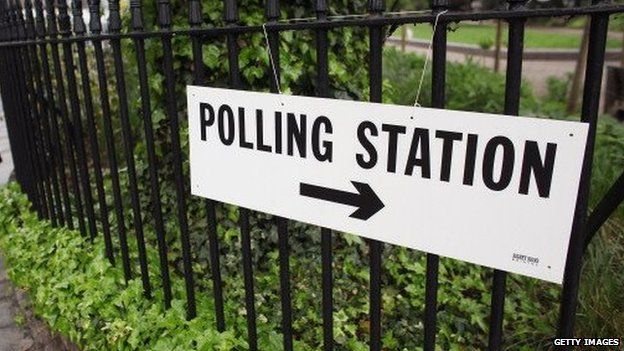 Voters mark an X on the ballot paper for their chosen candidate in a private voting booth. If anything else is written, it is considered a spoilt vote and is void. Polling stations are open  7am to 10pm, and votes are counted immediately after the close (which means lots of people working overnight), with results normally announced the next day.

Other than voting in person, there is also the option of voting by post, or by proxy (someone else votes on behalf of you).

3. Results and the forming of a government

To win a majority of the vote under the current system, a party needs to secure more than half the seats available. This system is known as “first past the post”, as supposed to “proportional representation” found in other nations. With a parliamentary majority, it is almost certain the new government will have the support it needs to pass legislation in Parliament.

There are 650 seats in the the Lower House of the Parliament known as the House of Commons, representing the 650 constituencies in the UK: 533 are in England, 59 in Scotland, 40 in Wales, and 18 in Northern Ireland.

Voters choose a candidate in their constituency (a geographical area containing about 60,000 voters), rather than voting for a party. In other words, it’s a constituency-based system. The candidate with the largest number of votes wins the seat.   And the party which gets the most Members of Parliaments (MPs) win, but this does not necessarily equate to the majority of the votes cast.  Also, almost anyone can stand as an MP, as long as they are over 18, a citizen of Britain, Ireland or any of the Commonwealth nations, and are not a royal, an aristocrat or imprisoned.

Within each party, a leader has been preselected democratically by election well before the General Election, and that leader becomes the Prime Minister upon securing a parliamentary majority, who will then lead the country for a period of 5 years, but is also responsible to the Parliament.  The Prime Minister remains in office so long as he/she can command the confidence of the House of Commons.  Parliament has to be elected every five years at a maximum though elections often take place more frequently, most usually every four years.

After the new Prime Minister is announced, he/she has to be appointed by the Queen, and is invited to form a government. 4. What happens if there is no overall majority?

A hung parliament is a possible outcome, when no single party has won an overall majority and no party holds more than 50% (or 326) of seats in the House of Commons. 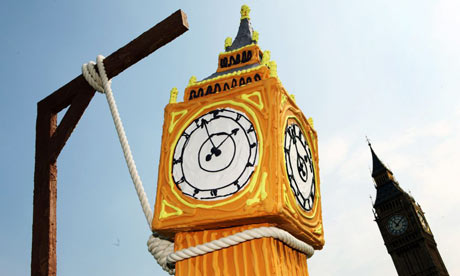 When this happens, the party with the most seats looks to other parties for support to gain an overall majority, potentially to form a coalition or partnership. It is also possible for a minority coalition to try to form a government.

This means the leader of the largest party does not necessarily become prime minister.

The current government is a coalition between the Conservatives and the Liberal Democrats, but in modern British history there has usually been a single party majority, with either Labour or the Conservatives in power.   We will later look at how the parties work in the UK. 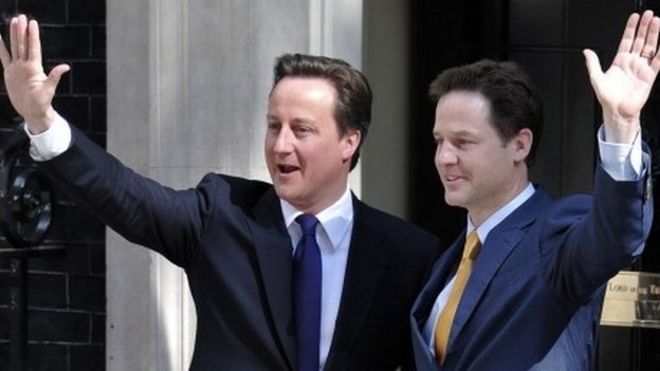 5. The end and the start of a new Parliament session

On 26 March this year, the Parliament session under David Cameron came to an end and was dissolved while the election campaign took place. Every seat in the Commons is then vacant, until the new session reconvenes, which will be the 18 May.

By then, all MPs and Lords are required by law to swear an oath of allegiance to the crown. They are not allowed to take their seat in the Commons, speak in debates or vote until the oath is made.

Also, the entire General Election only takes 25 days which is mercifully short!

6. The Political Parties in UK and what they stand for

The UK has many political parties, the main three being Conservative, Labour and Liberal Democrat.  In the House of Commons, there are also a range of other political groups also elected by the public.  This includes nationalist organisations like Plaid Cymru (Wales) and the Scottish National Party, Northern Ireland’s various political parties and minority parties like the Green Party.  Let’s have a look at what some of them stand for in this election:

Leading the coalition with the Liberal Democrats since 2010, David Cameron has been focussing on “building a stronger, more competitive economy and securing a better future for Britain”.  This party includes a broad range of traditional conservatives and royalists, neo-liberals and social conservatives.  Perhaps the most well-known leaders of the Conservatives in modern British history was Margaret Thatcher who held office from 1979 to 1990.

The Labour Party constitution states: “The Labour Party is a democratic socialist party. It believes that by the strength of our common endeavour we achieve more than we achieve alone.”  This party covers virtually the whole spectrum of left wing politics in Britain, supported and funded by the British trade unions, but it is not controlled or significantly influenced by them.  It was very weak following the recession of the 1970s, and was largely reformed by Tony Blair, who transformed it into a modern social democratic party.

Part of the coalition, the Lib Dems say: “We champion the freedom, dignity and well-being of individuals, we acknowledge and respect their right to freedom of conscience.”  This party has a mixture of social conservatives and social democrats.

The Green Party promotes the policies of ecological sustainability, a fairer, more stable economy and a more equal society.

Currently the most important political party in Scotland, and the party in power in the Scottish Parliament.  A nationalist party that organised a referendum on Scottish independence in autumn 2014.

Major Welsh Party but does not control the Welsh Assembly.

7. Their thoughts and policies towards Europe?

Here we won’t look at the individual British parties’ thoughts and policies towards Europe and the EU.  However,  you need to know about the standing of three parties who have in recent years made important remarks about Britain and its relationship with Europe.

For the last forty years, the party has been deeply divided over issues of sovereignty and the role of Britain in the European Union. A majority of party members are in favour of a revision of the terms of Britain’s membership of the European Union, and the holding of a referendum on a possible withdrawal. But other Conservatives, including industrial and business leaders, are strongly pro-European.  The Conservatives said that if they won the General Election in 2015, they would promise the British public this referendum in 2017.

A party that strongly wants Britain to withdraw from the European Union. The party has little in the way of policies, apart from Europe-bashing and the criticism of current immigration policies, but is surprisingly popular with voters disgruntled with the perceived failures of the main parties . It does not have any Members of Parliament (this is widely expected to change in this General Election), but has members in the European Parliament.

The party is the most pro-European of the major British parties.  The current leader, Nick Clegg, a graduate from Cambridge University and the College of Europe, speaks English, French, Dutch, German, and Spanish. Further reading on Britain’s relationship with the EU: http://www.bbc.com/news/uk-politics-26515129