Home  /  Europe and YOU  /  [Repost] In Europe, the bonds of friendship must never be taken for granted (by Vincent Piket, published on the SCMP 8 May 2015)

[Repost] In Europe, the bonds of friendship must never be taken for granted (by Vincent Piket, published on the SCMP 8 May 2015) 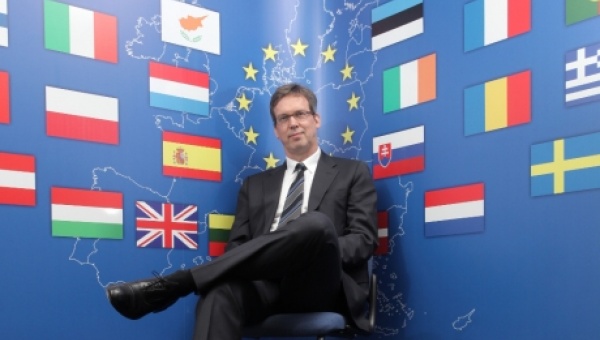 Published on the South China Morning Post, Friday 8 May, 2015

by Vincent Piket, Head of the EU Office to Hong Kong and Macau

Seventy years ago, the second world war came to an end in both Asia and Europe. The end to six years of military conflict, genocide and human suffering is commemorated around the globe.

Sixty-five years ago, with Europe still in ashes, economically and psychologically, the European peace project was started. We celebrate this on May 9, “Europe Day”. Visionary leaders from former enemies France and Germany were joined by others to make another outbreak of war impossible. How? By integrating Europe and by forging interdependencies between erstwhile foes.

It has worked. Europe’s integration is a daily reality for the European Union’s 508 million inhabitants. They can live, work, study, trade, invest, travel, buy, pay and retire across the national border of member states as if they are at home. Member state politicians and officials meet more often than can be conceived elsewhere in the world. It has created a political and practical interwovenness that has made war between EU countries unthinkable.

This achievement cannot be taken for granted, however. It needs to be nurtured, by creating solutions to the problems of EU citizens today. Economic growth, job creation, protecting the common currency, the environment, migration and terrorism are the big challenges. These problems require common solutions. Not because EU officials like it that way, but because it works better.

The trouble is that we need these common solutions at the very time when many citizens are eurosceptic. The EU is perceived by many as the cause of the financial crisis. It is equated with austerity policies, with lay-offs and cuts in pensions. The EU labour market is blamed for wage dumping or abuse of social services. The dismantlement of internal border checks is seen as aggravating illegal migration. These are difficult problems, which some politicians think can be solved by retreating into national positions.

The EU must follow its original recipe: produce concrete results that respond to shared needs and solve common problems. It means continuing the EU’s concrete internal solidarity, to help poorer member states converge with the mainstream. It means reducing red tape, without falling for the fallacy that business can thrive without common standards. It means aiding refugees, while jointly combating human traffickers. And it means continuing to pursue high environmental standards.

What does that have to do with Hong Kong? We engage Hong Kong within the EU’s overall relationship with China, with whom we celebrate the 40th anniversary of diplomatic relations. It is a relationship that has fast evolved from a predominantly commercial one to a strategic partnership. Hong Kong is a super connector within that relationship, in multiple areas, from trade and investment to maritime safety, combating cybercrime, innovation, and many others. We discuss these topics in our annual structured dialogue and in high-level meetings.

On Europe Day, therefore, we do not just celebrate the 65th anniversary of the EU’s integration, but also the profound relationship we have built with many major partners, Hong Kong included. A French flag hangs under the Arc de Triomphe monument in Paris in preparation for Europe Day celebrations. Photo: AFP