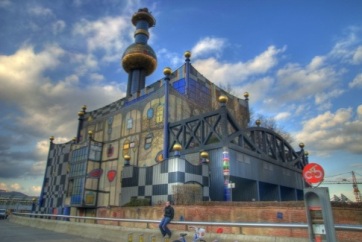 AEB (Afval Energie Bedrijf) is the largest waste-to-energy plant in the world, dealing with 4,400 tonnes of waste every day, of which 90% can be broken down into some useful raw materials during the incineration process.

Spittelau can be recognized easily from a distance due to its colorful fairy-tale outlook. In the 80s when Vienna planned to modernize the city’s incineration facility, she invited Hundertwasser to redesign its facade, which has since become a landmark of Vienna. Spittelau not only changes the impression of many about incineration plants but also proves its usefulness by providing heating to 60,000 households. 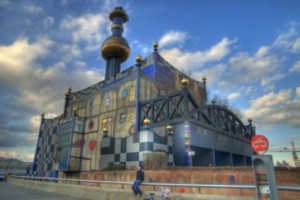 A large proportion of electricity and heat in Sweden is generated by incineration. Ironically, as the country’s recycling rate gets higher and higher, the amount of waste left for incineration is now not large enough to meet the needs of power generation. To overcome this problem, Sweden has bought waste from Norway!

Rubbish bins in Sweden are directly connected to the underground. The automated vacuum waste collection system has to a large extent contributed to the country’s high recycling rate.

Amager Bakke is Copenhagen’s latest incineration facility, expected to be completed in 2017. There will be an artificial ski mountain on its roof, as in the view of its architect, an incineration plant could be a leisure centre at the same time. Like any other incineration plants, Amager Bakke will emit carbon dioxide during the process, but instead of a steady stream of exhaust, it will only emit once every 250 tonnes of CO2 in the form of a giant smoke ring, allowing people outside to calculate how many tonnes of CO2 have been emitted.