Waste Management in the EU (6) – Disposal 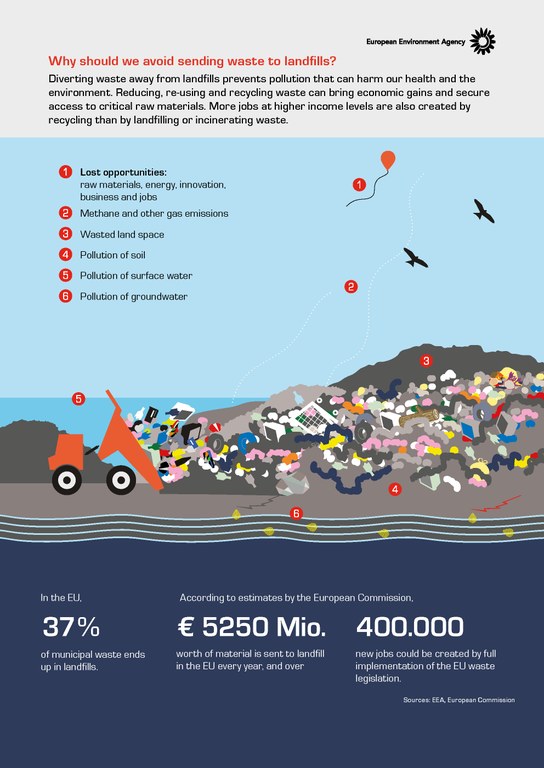 Waste disposal without prior treatment is the most undesirable waste management method both to the environment and human health. In order to limit the amount of waste sent to landfills and to encourage EU member states to do better in waste prevention, reuse, recycling and energy recovery, the European Commission has proposed to ban all recyclable waste sent to landfills starting in 2025. The proposal now awaits the legislation process under the European Parliament and the Council of the EU (news up to July, 2014).

Below we will take a brief look at the current situations of landfilling in different European countries.

In countries like Austria, Belgium, Germany, Denmark and Sweden, which have imposed a restricted or complete ban on landfilling, less than 4% of their waste end up in landfills. The rest gets recycled, composted or incinerated.

The UK produces so much waste annually that the total amount can actually fill the Wembley Stadium to the brim 70 times over! For a long time the UK has relied on landfill sites to deal with its waste, but because of the increasing environmental concern, the likeliness of having an even higher landfill tax in the future together with the EU landfill regulation (see our next case study), the government is now planning to replace landfills gradually by adopting other waste treatment methods.

An example. The Mucking landfill site in Essex was one of the largest landfill sites in Europe, receiving thousands of tonnes of rubbish every day via the River Thames from London. After its closure in 2010, it has undergone a full transformation and is now a wonderful nature reserve where rare species can be found. The Thurrock Thameside Nature Park has been opened to public since 2013.

According to the EU Landfill Directive (99/31/EC), EU member states have to ensure that landfill sites in their regions are up to the high standards set by the EU. Unqualified landfill sites that fail to meet these standards should be closed by 16 July 2009 at the latest. Otherwise, the European Commission could hold member states responsible before the European Court of Justice.

In 2014, Spain, Bulgaria and Slovenia were brought to the European Court of Justice as their unqualified landfill sites were still in operation.