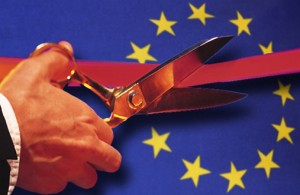 Brussels has long been criticized for its burdensome regulations governing everything from hairdressing to the shape of cucumbers. Originally, the regulations were aimed at simplifying different national rules in the member states by replacing them with a set of common European rules. By building a simplified system over Europe, the Commission expected to boost business growth. However, it turned out that the regulations increased business costs and hindered business growth. The increasing cost also reduces the incentive of entrepreneurs to take on more employees.  For instance, according to the Health and Safety Executive UK, the European safety rules demand hairdressers to wear elbow length gloves when washing hair and to improve salon furniture. However, to hairdressers, these measures mean higher costs in cooperating hair salons.  The EU regulations are thus often considered as a burden, an obstacle at the same time, for business.

According to BBC News, three quarters of EU citizens think there is too much red tape and the European Union should be more pragmatic. Under the increasing political pressure for change, the Commission proposed the Regulatory Fitness Programme (REFIT) in 2012 which aims to reduce administration burdens and remove obstacles to business growth by withdrawing an array of EU regulations.  This year, the Commission made a step further in achieving these goals.

At a time when the Eurosceptic parties are gaining ground all over Europe, some say that the European Union is trying to gear up for the European elections in 2014 by putting more efforts into erasing its bureaucratic image. However, recalling the fact that the EU-based rulemaking is still vital in many other domains, it is not certain if cutting red tape is kind of measures that would satisfy large parts of the eurosceptics especially the UK Conservative Party who demands a return of competences to national governments.

Would “REFIT” transform the European Union from a bureaucratic institution to a pragmatic one?  Would Brussels succeed in gaining back the public confidence on the European integration in the end? Whether or not, as José Manuel Barroso put, EU’s effort in cutting red tape made EU more pragmatic and less interfering, which reflected a “cultural change in the way EU works”.

“Top 10 most burdensome EU laws for small and medium-sized enterprises: How the Commission is helping SMEs”European Commission “Action Programme for Reducing Administrative Burdens in the EU”