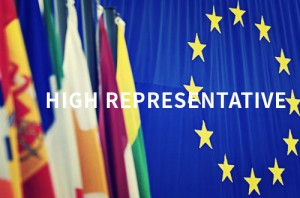 The new High Representative: who will be the next to shape EU foreign policy?

Escalating violence in close European neighborhood and worsening relations with Russia as a result of Ukraine crisis call for the European Union to strengthen its foreign policy and effectiveness of response. EU member states are soon about to choose who will be in charge of the EU’s external relations and defence. During the summit in Brussels on 17th July EU leaders did not reach any agreement on nominees for top EU posts, one of which is the position of the High Representative for Foreign Affairs and Security Policy. The decision has been postponed until the next meeting on 30th of August. However, there have been many speculations on the likely successor of current EU top diplomat – Catherine Ashton.

Who will become the next EU foreign policy chief?
Prolonged negotiations over the successor of Catherine Ashton come as no surprise due to the importance and complexity of the job, as well as numerous considerations that have to be taken into account to find a candidate which can satisfy all EU member states, European Commission and European Parliament despite their disparity of views. Although the European Council has not decided on the nominee yet, due to increasing efforts to encourage gender equality in the European Commission there are strong speculations that the next High Representative will be a woman. Political affiliation of a candidate is of no less importance in order to maintain the balance between left and right. Due to the fact that the new president of the European Commission comes from the centre-right European People’s party, the centre-left Party of European Socialists counts for the positions of the High Representative and the head of European Council. German Chancellor Angela Merkel and France’s President François Hollande also expressed anticipation that new foreign policy chief should be from the centre-left Socialists and Democrats group.1
Above-mentioned criteria fit the portfolio of Socialist Federica Mogherini, Italian Minister of Foreign Affairs strongly lobbied by Prime Minister Matteo Renzi. However, the candidacy of Mogherini is criticized for her lack of extensive experience in foreign affairs, serving for the government only for couple of months. Moreover, she is opposed by Baltic states and Poland for her soft stance on Russia during Ukraine crisis. Accusations of her pro-Russian attitude have strengthened when she chose Russia as her first overseas travel destination after Italy commenced the rotating EU presidency last month. Moreover, her expression of Italy’s support for controversial South Stream project caused concerns that she may prioritize national interests over those of the EU.2
Regional factors play equally significant role in the nomination. Post-communist states in Central and Eastern Europe, which joined the EU in 2004 and 2007, hope to get at least one of EU top positions. Their expectations can be met by appointment of Bulgaria’s Kristalina Georgieva, who is currently the EU Commissioner for International Cooperation, Humanitarian Aid and Crisis Response. She is perceived as a potential compromise candidate and believed to be supported by Jean-Claude Juncker.3 Georgieva has been numerously praised for her efforts to enhance EU’s disaster response and promote the EU as humanitarian aid provider.4 Although she is not affiliated with any political party, in 2009 she became EU commissioner thanks to the support of the centre-right government. Therefore, her alleged relationship with the centre-right can possibly hinder her appointment.
Among highly debated candidates there is also Polish foreign minister Radosław Sikorski. Leading Poland’s Ministry of National Defence in 2005-2007 and the Ministry of Foreign Affairs since 2007 makes him a well-experienced contender. His nomination would considerably affect EU relations with Russia. Sikorski adopted tough posture toward Russia after secession of Crimea and has been a potent advocate of sanctions. Although it has been also emphasized that he handles the crisis above national interests and seeks for common EU position5, his sharp attitude toward Moscow raises reservations from EU leaders.6 Moreover, his reputation has been recently undermined after Polish eavesdropping scandal which revealed his remarks about the US and the UK.7

Challenges ahead of the new High Representative
Current international circumstances pressure the EU to appoint a highly competent candidate able to effectively handle its representation in time when European neighbourhood is in the throes of instability. Ukraine crisis became a wake-up call for EU’s foreign policy. In face of escalation of conflict between Ukrainian government and Russian separatists, the new High Representative needs to strengthen efforts to protect EU’s legitimacy and maintain its strong stance on the situation in the region. Beside Ukraine, tensions in the Middle East and North Africa are another great challenge. EU’s top diplomat will have to balance foreign policy strategy on the European level with voices from all EU member states that want to have their own say on external relations. It will be thus important to maintain extensive cooperation of the High Representative and European Council (with its president) in setting foreign policy priorities.
Moreover, ‘double-hatted’ function requires the High Representative to enhance communication with other members of the European Commission and actively coordinate their efforts regarding policy areas linked to external affairs such as humanitarian aid, development and trade. In addition to being one of spokesmen and negotiators of the EU, foreign policy chief will have to reconcile diplomatic role with administrative duties. He/she has to possess exceptional strategic and organizational skills to lead the European External Action Service which is relatively new institutional creation. The EEAS needs to respond to voices of criticism8 with the help of the High Representative in clearly setting goals and implementing action plans to achieve them.
The European Council decision on the nominee is not dictated merely by personality and experience. It is also affected by interplay of other important factors like candidate’s gender, political affiliation or opinions on current issues in international affairs. Consensus has to be found between political groups as well as between states of varying national concerns. Regardless of who becomes new EU foreign policy chief, he/she will have a chance to reshape image of the EU as powerful player in world politics with strong agenda on problems faced by international community.

Berger, Cathleen; von Ondarza, Nicolai (2013) The next High Representative and the EEAS, German Institute for International and Security Affairs

Helwig, Niklas (2014) The High Representative3.0: Taking EU foreign policy to the next level, The Finnish Institute of International Affairs