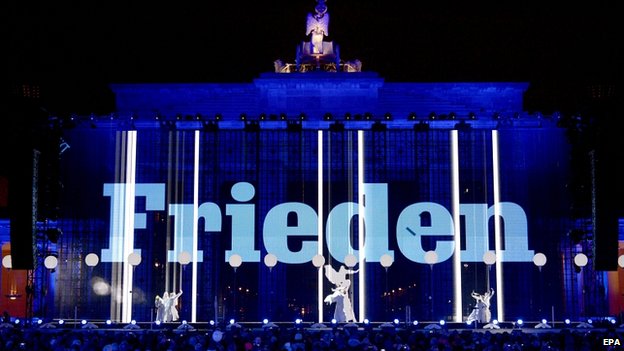 Some 8,000 helium balloons have been released into the night sky over Germany’s capital at the culmination of events to mark the 25th anniversary of the fall of the Berlin Wall. 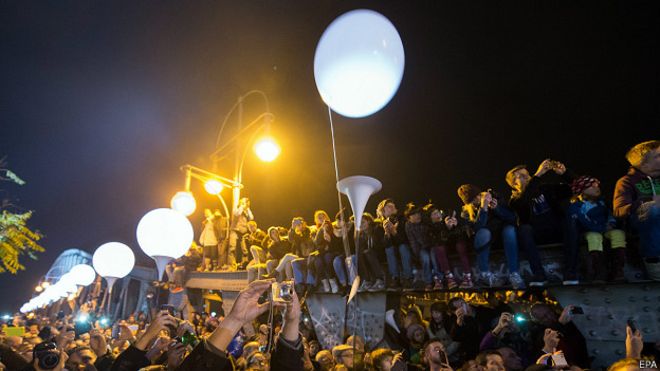 Chancellor Angela Merkel said the fall of the wall had shown the world that dreams could come true.

The Berlin Wall was built in 1961 to stop people fleeing the communist East. Its fall in 1989 became a powerful symbol of the end of the Cold War, whilst turning a new leaf for the history of Europe and beyond.

The white balloons – perched on 3.6m poles to match the height of the wall and stretching for 15km (nine miles) – were released one by one to symbolise the breaching of the wall by crowds of protesters.

The Berlin State Orchestra under Daniel Barenboim played Beethoven’s Ninth Symphony “Ode to Joy” in front of the Brandenburg Gate, the same piece of music that is used by the European Union and the Council of Europe as their anthem celebrating unity and harmony of the people. 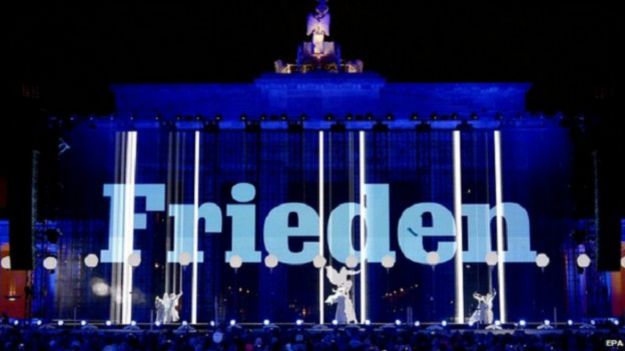 The word “peace” was projected on to the Brandenburg Gate

“We’re the happiest people in the world and we’re thrilled that you brought the Berlin Wall down 25 years ago,” said the Mayor of Berlin, Klaus Wowereit, as the first balloons were sent aloft. “Nothing and no-one can stand in the way of freedom.”

For a weekend the balloons had become a part of the city, with Berliners strolling, jogging or cycling along the route.

Today not much of the Wall remains, and often you don’t even notice when crossing between East and West. That’s because, after 1989, Berliners wanted to destroy the much-hated barrier and rebuild their city.

But suddenly seeing the circuitous and often illogical line which tore through the city’s heart was a reminder of the insanity of using concrete to split a city in two, dividing neighbourhoods, friends and families.

Now the balloons have floated off into the sky, each one accompanied by cheers from the crowd – a shining and delicate symbol of peace and light, in stark contrast to the brutality of the heavy slabs of grey concrete. And a powerful reminder of how 25 years ago, under pressure from ordinary Berliners, this deadly barrier suddenly lost its threat. 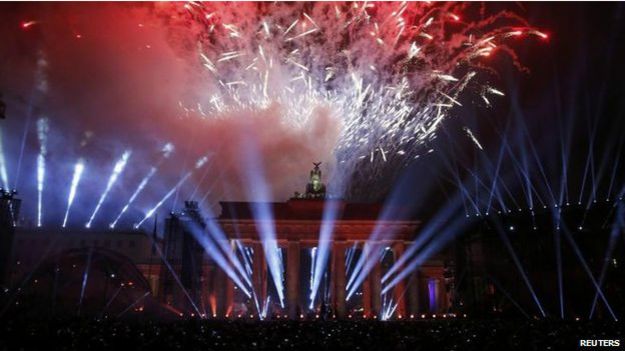 Fireworks over Brandenburg Gate followed the release of the balloons

Chancellor Merkel, who grew up in East Germany, and other officials laid roses in one of the remaining sections of the wall.

Speaking at the opening of a new information centre about the Wall, Ms Merkel said it was easy to forget what had happened and it was important to remember it.

“We can change things for the better,” she said. “This is the message for… Ukraine, Iraq and other places where human rights are threatened. The fall of the Wall showed us that dreams can come true. Nothing has to stay as it is.” 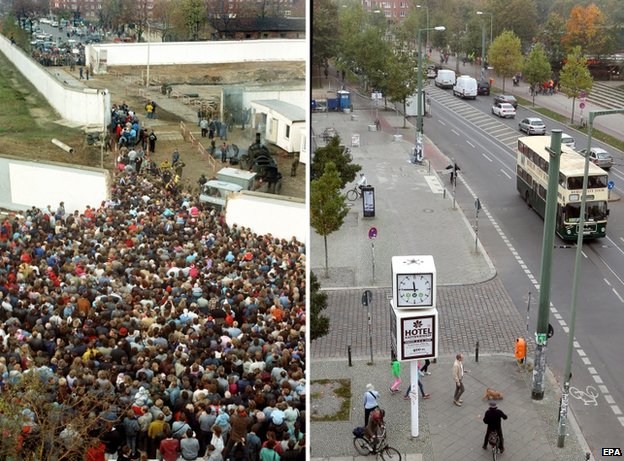 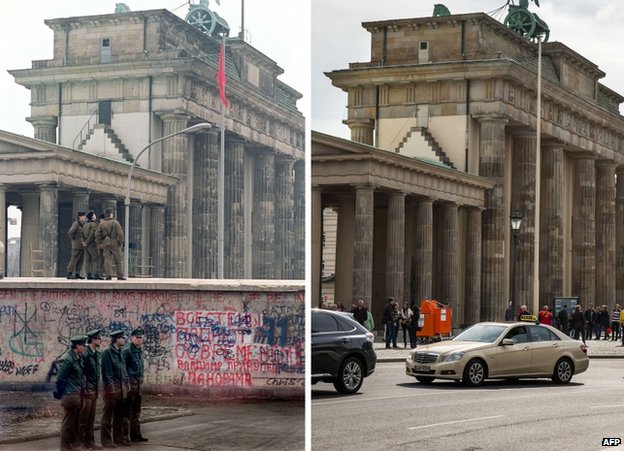 The wall stretched for 155km (96 miles) through Berlin but today only about three kilometres of it still stands. At least 138 people died trying to flee to West Berlin. Within a year of the wall’s collapse, Germany – divided after its defeat in World War Two – was reunited.

Mr. Gorbachev, the leader of the USSR in the late 1980s also attended the commemoration events in Berlin. He is credited with rapprochement with the West and creating a more liberal atmosphere which led to the collapse of communist regimes in Eastern Europe in 1989. 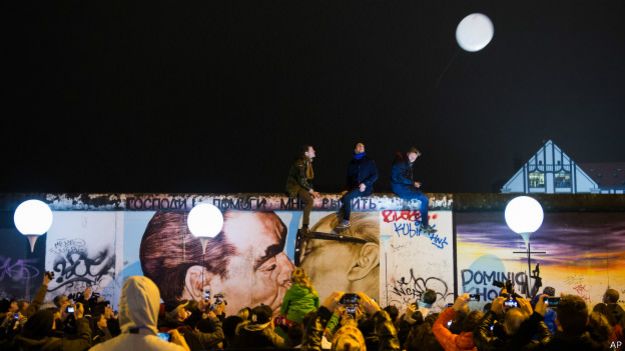 Tens of thousands joined the festivities in the German capital