European market has become volatile after the unsuccessful negotiation between Greece and its creditors (European Commission, ECB and he IMF).  A talk was arranged at the European Commission’s headquarter in Brussels to finalize the list of Greek economic reform of Greece in order to agree on further bailout fund. It is a critical moment as there is a €1.5 billion loan repayment due to be paid to the IMF by the end of June. Without such deal, Greece is likely to default on the repayment and this could lead to financial turmoil in Greece and the wider Eurozone. According to some sources, Greek negotiators walked out of the negotiation only after 45 minutes after it began.

Greek stance was tough vis-à-vis its creditors. Following the failure of the talk, the Greek Prime Minister Alexis Tsipras vowed his country would not give in to the demands of its creditors and denounced the compromise plan as humiliating for his country. Meanwhile, there is no sign of softening stance from the three bailout monitors (the IMF, ECB and the European Commission). The resolute tone from the Greek side alarmed investors as it appears that the difference between the two sides are further apart and reaching an agreement is becoming increasingly challenging.

The development of events regarding to the Greek bailout negotiation has renewed the fear of a Greek default and potentially a “Grexit” of the euro. Athen stock market was down 5% in a single day and Greek bonds rate rose sharply. The Greek situation also affected the neighboring Eurozone countries as the bond rates of other Euro countries such as Portugal, Spain and Italy are also on the rise.  It is highly uncertain how the negotiation will end up and the development of the next two weeks will be crucial for Greece and the Eurozone. 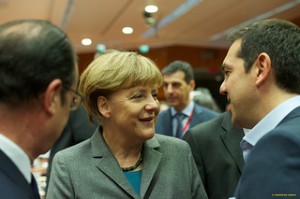