Brexit and its implications 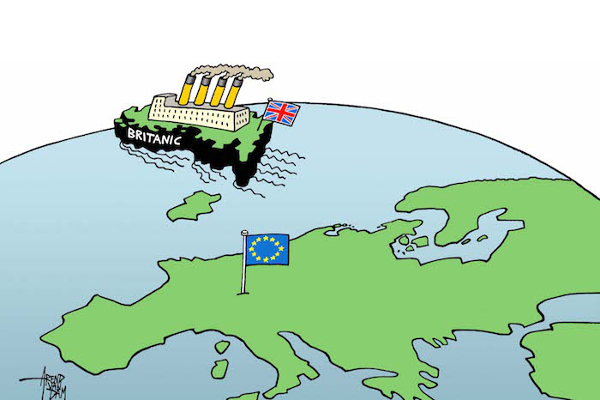 On 23rd June 2016, a historical referendum took place in the United Kingdom on whether the country should remain or leave the European Union. Despite the widespread optimism of the polls indicating that the Remain camp would win, the final result shocked the whole world with 52% voting leave against 48% choosing remain. The outcome of the referendum will involve the country invoking Article 50[1] of the Lisbon Treaty to begin its withdrawal procedure from the EU.

The exit of Britain immediately triggered political turmoil in the country. Following the voting result, British Prime Minister David Cameron, re-elected in the 2015 general election, announced his resignation in October this coming year. Consequently, his Conservative party are now split over who will succeed him to become the next Prime Minister, with potential candidates Boris Johnson and Michael Gove from the Brexit camp alongside Theresa May of the Remain camp. The opposition Labour Party is also in chaos following the resignation of a large number of shadow ministers protesting the party leader Jeremy Corbyn for his lukewarm campaign in making the country remain in the EU. In the public arena, a serious rift is now markedly dividing the richer and the poorer, the elderly and the younger as well as the pro-EU and anti-EU. The rupture has also extended to the sub-national level when the First Minister of Scotland Nicola Sturgeon announced that Scotland would consider a second referendum on Scottish Independence. Sturgeon said it was “democratically unacceptable” that Scotland would be taken out of the EU against its will when 62% of Scottish voters chose to remain in the European Union[2].

Brexit has also cast doubt on the future of the British economy. Before the conclusion of the negotiation of Brexit with the EU, huge uncertainty remains concerning two main issues. Firstly how the UK can gain access to the Single Market and secondly the question of freedom of movement of people.  The two issues will have significant impact on whether UK businesses will continue to enjoy the same preferential trade arrangement with other EU countries; whether the financial sector, the most important economic sectors in the UK, will be able to “passport” in the whole EU; and whether the UK will become a less favorite destination for foreign direct investment due to restricted access to the EU’s market. The funding from the EU for research and higher education, involving numerous schemes such as Erasmus and Horizon 2020, will potentially halt in some years’ time. Given the anti-immigration rhetoric of the Leave campaign, it is not likely that the UK would accept free movement of workers into the UK and reciprocally the EU would restrict the UK citizens working in the EU countries. A lot has to be dependent on the upcoming negotiation between the country and the EU but one thing is sure: the UK will most likely lose all its rule-making power within the EU.

Moreover, the British leave vote is also seen as a great stimulus for the populist movement across Europe. In France, the far-right National Front leader Marine Le Pen has recently pushed forward for a similar referendum in France. Although it is not likely that her plan would succeed, her rising popularity will have some significant influence in the 2017 Presidential election in France. Furthermore, the rise of populism is also changing the political landscape of some major European countries. In Spain, the rise of the left-wing and anti-establishment party Podemos party in the recent general election on 26 June has continued to hinder the formation of a new government. In Italy, the popular Five-Star Movement won two positions in Rome and Turin in the mayoral elections in June this year and a referendum of constitutional reform in Italy will take place in the coming months. In addition, Italian Prime Minister Matteo Renzi also said he would resign if the vote failed. The Austrian presidential election in May 2016 also experienced a similar political phenomenon where the anti-EU FPO candidate Norbert Hofer got almost 50% of the total votes. The Netherlands also held a referendum in April 2016, initiated by the Eurosceptic activists with an internet petition of 400,000 signatures, with a result of 61% voting to reject the EU-Ukraine partnership deal. The turnout was around 32% low but above the 30% threshold for it to become valid. Widespread euroscepticism across the EU will make the negotiation between the EU and the UK more complicated as accommodating Brexit might possibly encourage more domino effect. It will also be a daunting task for the EU leaders to rebuild public confidence in the EU.

Concerning the EU’s economic policies, the British leave from the EU threatens the prospect of the ongoing negotiation of the Transatlantic Trade and Investment Partnership (TTIP) in which the UK is the strongest partisan. Since its introduction in 2013, the negotiation received far-flung opposition in countries such as Germany and France over the issues of agriculture, culture, investment protection and others. The withdrawal of the UK from the negotiation will also be a huge blow to the deal. In addition, instead of the non-interventionist approach preferred by the UK, a more static approach will emerge in formulating the EU regulations in the areas of competition, technology, financial services as well as other business sectors. Big companies from Silicon Valley such as Google will face even stronger scrutiny of the EU Competition regulatory arm. Cross-border merger and acquisitions might also face stronger resistance at the EU level.

The UK and the world

In terms of the UK’s international relations with other countries, although US president Obama said that the special relationship between the US and the UK would remain unchanged, the loss of influence of the UK in the EU affairs will most certainly drive the US towards Germany and France. In recent years the UK has made itself the most important Western ally of China and signed a number of important bilateral cooperation agreements with China. The UK was even criticized by other G-7 countries in Japan in May 2016 for its “constant accommodation” towards China. Indeed, China regards the UK as the most important partner in Europe and relies heavily on the UK in its outbound investment in Europe as well as internationalization of the RMB. The referendum result is also likely to propel Beijing to rethink its relationship with the UK.