Chinese investment in the European Union (EU) has increased significantly in recent years and the value of investment reached US$ 18 billion in 2014, according to Rhodium Group statistics. Infrastructure and logistics is among the sectors that Chinese investors target. China Ocean Shipping (Cosco)’s investment in Piraeus port in Athens is a case in point.

Cosco (Cosco Pacific Ltd., a subsidiary of COSCO Group) is a Chinese state-owned company listed in Hong Kong and the largest liner carrier in China. In 2009, it obtained a 35-year concession period from the Greek government to operate two terminals of Piraeus Port (right to operate in the second terminal of the Piraeus Port Authority and right to rebuild and operate an unused third terminal). The deal amounted to a nominal value of €4.3 billion for the whole period and it required Cosco to make substantial investments in terminal II and complete a new section of the terminal of pier III. In September 2013, Cosco and the Greek government agreed that Cosco would invest an extra €230 million to increase the annual capacity of the terminal. The former Prime Minister of Greece, Antonis Samaras, said during the inauguration ceremony of Pier III in 2015 that the Piraeus Container Terminal project has been the most important investment in Greece in the last decade. However, there was some uncertainty over the status of privatization of pier I of the Piraeus Port Authority after the Syriza government took power in Jan 2015 and the government is still undecided on the issue.

Piraeus port is a strategic location for Europe-China trade. It is a good transshipment location for goods to be destined to Central and Eastern Europe. This could save from four to ten days than using alternative ports such as Hamburg, Rotterdam and Antwerp. Cosco’s investment since 2009 has considerably improved the capacity at pier II and containers throughput markedly augmented. Piraeus port became one of the fastest growing ports in the world, with an increase of handling from 1.7 million TEU (twenty feet container unit) in 2011 to 2.7 million TEU in 2012. Its throughput reached 3.7 million TEU in 2014, a fold of nine times when it handled 433,000 TEU before the Cosco’s involvement in 2008. The growth could continue as Cosco expanded its investment to increase the annual capacity to 6.2 million TEU by 2020. Chinese investment in Piraeus Port has helped modernize the terminal equipment, bring in businesses from shipping companies which are close partners of Cosco and notably enhance operating efficiency. However, media reports also revealed that the working conditions in the Chinese subsidiary are inferior to that of the Greek standard. (08 June 2011, NPR issues: In Greek Port, Storm Brews Over Chinese-Run Labor) 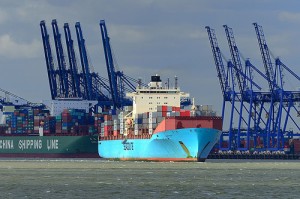 The latest development is whether the Greek government would stick to the plan in 2014 of the previous government to privatize 67.7% stake of the Piraeus Port Authority. The shortlisted buyers include Cosco, Maersk, Ports America Inc. and International Container Terminal Services. Chinese Cosco is the forerunner as the company is already operating in the second and third terminals. The deal is very interesting for China as it will improve its supply chain network in Europe. As part of the Chinese strategic framework “21st Century Maritime Silk Road”, connection to the Mediterranean Sea via the Indian Ocean and the Suez Canal is one of the two main sea routes planned in the strategy. Greece is seen as the most eastern part of the West and hence an important point of entry into Europe. Further investment in infrastructure will be followed to improve the connection between Piraeus Port and other cities in Central and Eastern Europe. For example, China already agreed to assist Hungary and Serbia to upgrade the railway network between Budapest and Belgrade. This will help Greece become the major entry point of Europe from Asia. In turn, this will bring investment, jobs and business opportunities that Greece very much needs in the midst of crisis. Last year during a visit to Athens, Chinese Premier Li Keqiang also indicated that China would seek further cooperation with Greece in airport, rail, road and other infrastructure development.

The privatization plan has met vigorous opposition from port employees as well as opposition parties claiming that this will have painful consequences for employees, local communities and critical sectors of the economy. Resistance to Chinese investment in Piraeus port is not new. When Cosco signed the concession agreement with the Greek government of Kosta Karamanlis in 2008, the opposition party PASOK of Geórgios Papandreou, who subsequently became the next Prime Minister of Greece, openly opposed the deal and pledged its renegotiation. He got strong support from the dockworkers’ union who oppose privatization. After he came to power in 2009, he did not stick to his promise. At that time the Greek debt crisis just began and there was a strong reason for the government to maintain its good relationship with China. Any move to upset his Chinese partners was not sensible. Also the Chinese investment in the port actually brought substantial advantages to the country. The new Syriza government also faced the same scenario. They fiercely opposed the privatization plan and appealed to the voters by promising to reverse it. However, following several setbacks in various negotiations with their European partners on the bailout arrangement, the government changed the tone and Prime Minister Alexis Tsipras commented that, during his speech on the Chinese warship at Piraeus Port in mid-Feb this year, Greece could be a significant commercial gateway for China into Europe. Therefore, the chance of changing policy of Syriza government is still possible and it remains to be seen how the situation evolves.