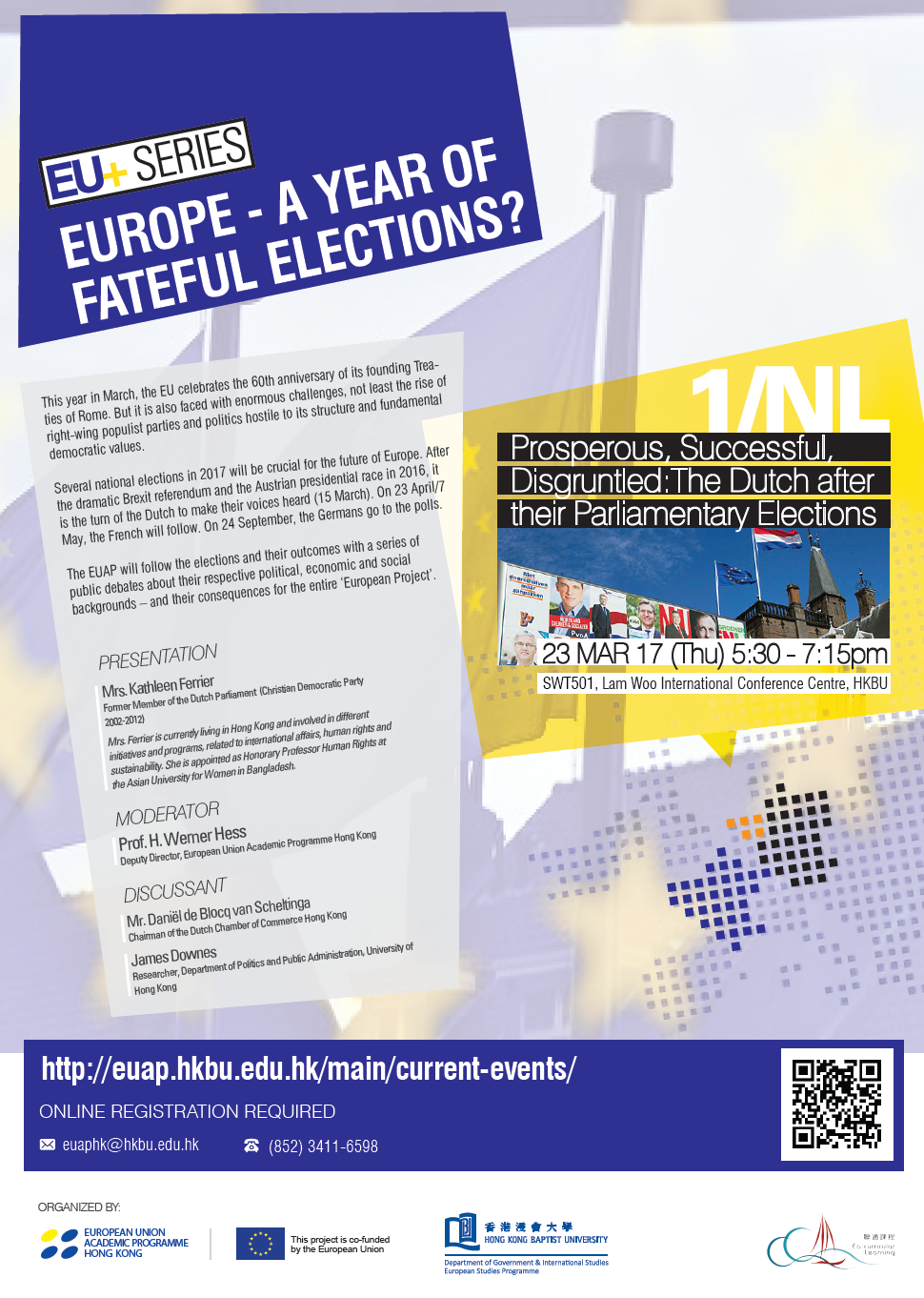 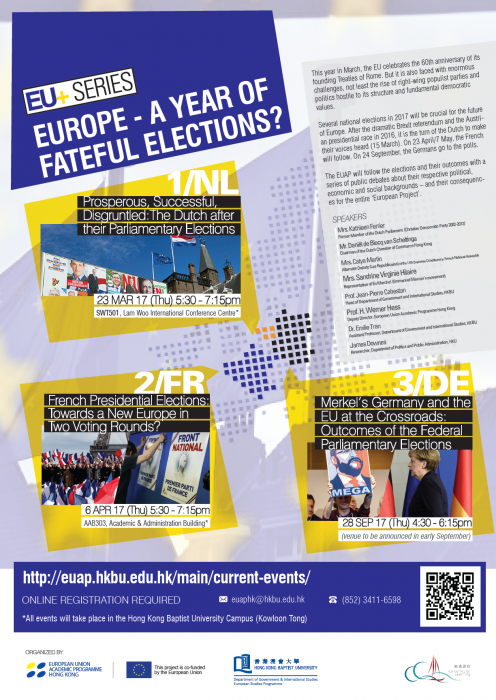 Seminar “Prosperous, Successful, Disgruntled: The Dutch after their Parliamentary Elections”

Biography
Mrs Kathleen Ferrier: Member of the Dutch Parliament for the Christian Democratic Party 2002-2012, is currently living in Hong Kong and involved in different initiatives and programs, related to international affairs, human rights and sustainability. She is appointed as Honorary Professor Human Rights at the Asian University for Women in Bangladesh.
Daniël P. de Blocq van Scheltinga: the Founding Partner of Polarwide Ltd, a strategic advisory firm with a focus on cross border transactions between Europe and Asia. He is also the Chairman of the Dutch Chamber of Commerce in Hong Kong, and Treasurer of the European Chamber of Commerce in Hong Kong. Previously he held various positions within the investment banking arm of ABN AMRO, and was the first foreigner to be approved to run the finnace arm of a top-tier Chinese State Owned Enterprise, being CEO of ChemChina Finance Corp. Daniel has lived in Hong Kong since 2001. He holds a Masters Degree in International Law from Leiden University.

The seminar discussed the outcome of the Dutch general elections on March 2017, in which the VVD of Prime Minister Rutte gained a simple majority although losing seats in the national parliament. At the same time, the PPV of Geert Wilders did not become the largest party in the parliament (as expected) but gained seats nonetheless. The international media focus on Wilders, however, disguises the fact that there is an overall stable party landscape in the Netherlands. With a very high participation rate in the polls (over 8-0% of the electorate), voters tended to migrate to other parties within the main political camps but expressed high confidence both in the democratic system and the all-important EU membership of the Netherlands. Kathleen Ferrier interpreted this as part of a long-known process of social and political changes in the Netherlands, the elements of which can be characterized as ‘secularization’, ‘depillarization’, ‘social fragmentation’, ‘individualization’ and migration. That is to say that in the Netherlands (like in other EU countries), religious affiliation has been declining for decades, opening up former social milieus based on religious denominations. 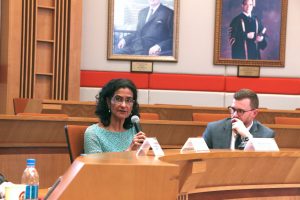 At the same time, economic change has led to greater social stratification, while the Dutch increasingly prefer individual life choices over social traditions (including the elderly population of which over 50% already live in single-person households). Decolonialization and globalization have also led to substantial inward migration into the country. Daniel de Bloc van Scheltinga analysed the currently very good economic situation of the Netherlands. But he also pointed out that voters are increasingly worried about the quality of jobs (25% of employees now have only temporary, ‘flexible’ contracts) and the uncertainty about further changes in the employment sector.

In the wake of the global financial crisis, there is also a lack of trust in the country’s main financial institutions, especially the banks, and growing concern about the emergence of greater regional and social disparities as in the past. Many Dutch citizens interpret the increasing income inequality as a sign that ‘the elite’ may have become self-serving, while populists like Geert Wilders exploit this political distrust to spread hate propaganda against Muslim citizens. There are concerns in this context that at least some of the media encourage xenophobia and social cleavages precisely at a time when the democratic society does not seems to be sure about the road map for its future.  All speakers, however, agreed that all in all the country seems to be well positioned and able to cope with current European and global challenges. The balanced election results appear to confirm this – as they also show that European voters may not fall so easily for right-wing populist messages as media reports had suggested.

This is a CCL event. Students who want to register for CCL have to sign up at the reception table at the event