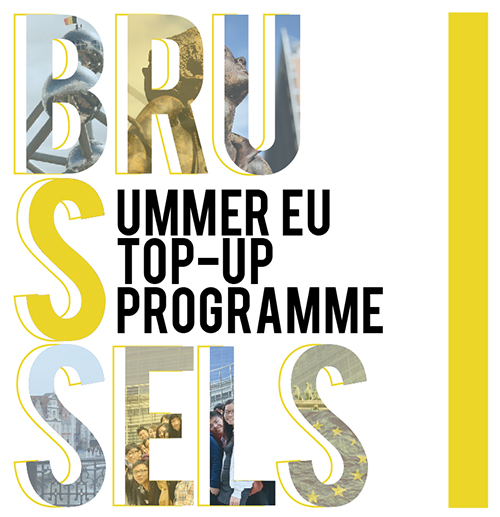 The 5-day EUAP Summer EU Top-up Programme is organized by the European Union Academic Programme Hong Kong (EUAP) with the support of the European Union (EU), the Hong Kong Economic and Trade Office in Brussels (HKETO) and Flanders District of Creativity. The aim of the programme is to enhance students’ knowledge on the EU and on its role in different global issues.
A total of 35 students have joined the 5-day programme this year. They are students of 3 universities – Hong Kong Baptist University, the University of Hong Kong and the Chinese University of Hong Kong, with a diverse academic background. Throughout the trip they were offered chances to visit the EU institutions, engage in discussion with EU/HK officials and students on various topics and a day-trip to other Belgian cities to take a glimpse at the cultural and creativity scene in the Flanders region.

A month before the trip started, participants were assigned into 7 groups to work on presentations for the pre-departure briefing in order to familiarize themselves with some basic ideas of the EU. The briefing session on 31st May started off with an introduction by the EUAP team on basic information of the programme and travel tips. Mr. Asad Beg (Head of Political, Press and Information Section of the European Union Office to Hong Kong and Macau) was invited to give an introduction on the European Union. An impromptu session was hosted to help stimulate students’ applicable prior knowledge to the issues in the EU. In the second part of the session, participants have given presentations on the followings topics:
EU – Hong Kong Trade relations / Hong Kong Economic and Trade Office / European Parliament / EURO Crisis & Recovery / EU Enlargement / Climate change (Europe 2020) / Belgium Eco-design Companies. 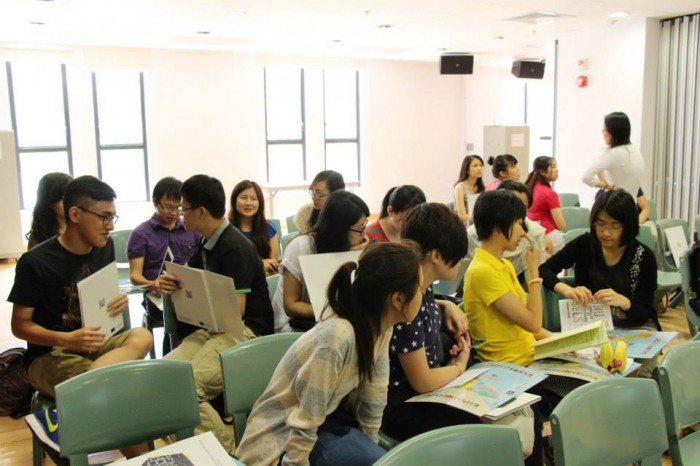 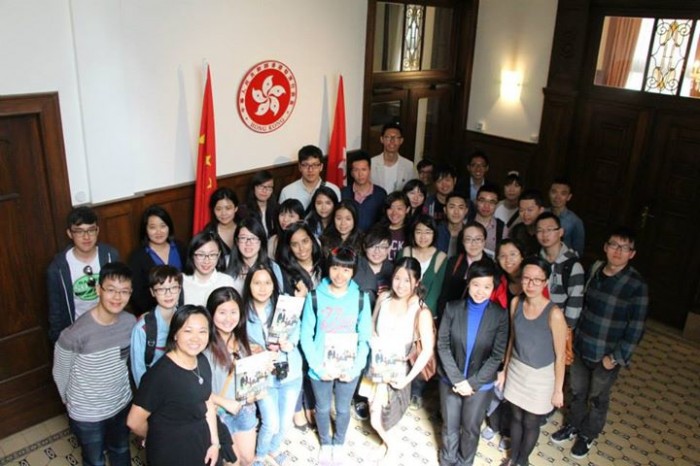 An information officer from the Parliament has given a briefing session and guided tour to students in the Parliamentarium. He first explained the parliament election 2014, the voting rates and measures that the EU member states have taken to boost the voting rate. Questions were raised on the reasons of a low voting outcome despite increased promotion, and also on the EU perception of visitors to the parliament from other EU member states. The officer then talked about the composition of all EP parties before and after the election. They asked how the parliamentarians actually work together in the same party. Next, he talked about the European Commission and the candidates for the next president and has discussed the criteria of a suitable candidate including language ability. Other topics that he has gone through include the EU budget, enlargement and EURO. Students were also interested in EURO’s future, the influence of separatist movement of Scotland, Eurosceptic views of the UK and the position of Germany in the EU.

After the briefing, students went on a tour inside the plenary chamber. The officer explained the seating plan of the chamber and the role of interpretation during the plenary sessions. Students were curious about the reasons of having two venues of parliament sessions. One participant was interviewed by journalists from a Ukrainian channel at the end of the visit on the reasons for her interest in the EU. 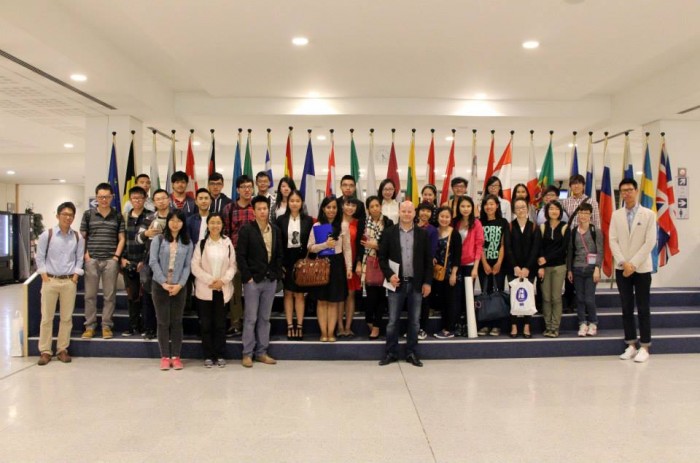 Students from our programme and from Macao were welcomed by Prof. Maria Telo from the Institute of European Studies. The topic of presentation and discussion was “Europe-China mutual perceptions”. Students from the institute first gave a presentation on the current exchange between Belgium/EU and China, and European’s perspective on China in different aspects. One of them made a comparison between the situation of EU-China and EU-US. It was followed by presentations by students from Macau, suggesting that China, HK, Taiwan and Macau should maintain a close relationship like member states of the EU. Oranch Cheung from our programme then talked about the difference in life and values, as well as cultures based on his own current experience of working now as an intern in Berlin. Meanwhile, Joe Cai pointed out how people’s memory of history and the media have shaped the view of most Chinese citizens towards Europe. Later on a debate on China-HK values was sparked off. It has attracted enthusiasm of students to discuss and think about how the EU and China could work mutually on their relations in a constructive way. 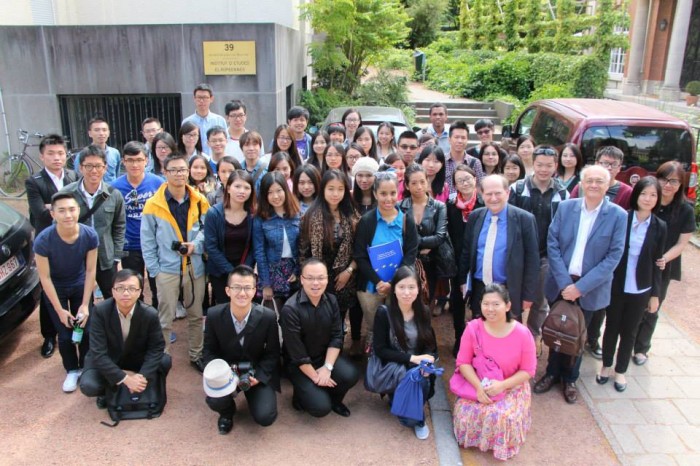 The day started off with the presentation of Mr. David Tunney (Social Media Expert, Strategic Communications Division) on the functions of the EEAS. He talked about his responsibility and what EU should achieve through using social media platforms. Participants had a lot of questions concerning the foreign policies of EU e.g. how the policies are formulated among 28 member states and how the EU deals with specific issues such as Ukraine/Russia.
The second presentation was given by Ms. Jolita Pons (Desk Officer China, Hong Kong, Macao – EEAS) on EU- Hong Kong and EU-China relations. She briefly explained what has been done between HK/China and the EU and EU’s interest and concern about HK/China. Questions were raised on whether EU supports the current political movement in HK and how they view the recently issued “white paper” issued by the PRC. EU’s attitude and measures on the human rights situation in China is also discussed. 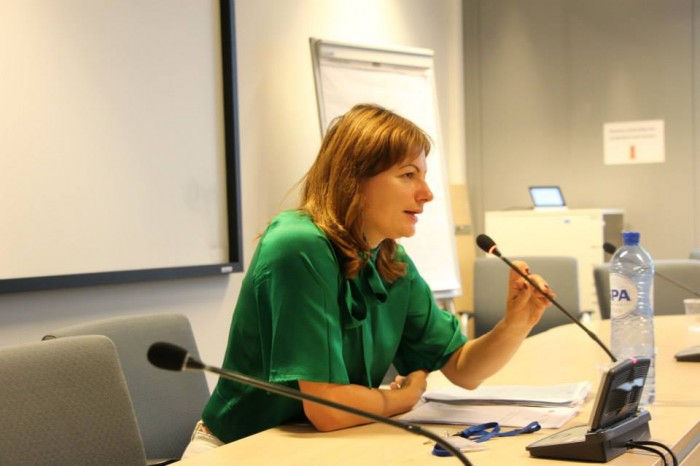 Next we had Mr. Laurent Bardon (Policy Officer China, Hong Kong, Macao, Mongolia and Taiwan, DG Trade – European Commission) telling us about the EU – Hong Kong / China trade relations. He introduced how the mechanism works and talked about the issue of green cars between EU-HK. Students asked about the current EU-China trading trend, anti-dumping policies, current bilateral agreements that EU has made and how EU can further develop as a whole economically.
After the lunch at the EEAS staff canteen, we moved on to other important issues of the EU beginning with the EU domestic and international climate policy presented by Mr. Martin Kaspar (Policy Officer Climate Development Finance, DG Climate Action – European Commission). The EU climate policy targets up to 2050 were introduced as well as EU’s international efforts. Upon questions by the students, he further explained his work, the EU emission trading scheme, and also EU’s view on nuclear development. 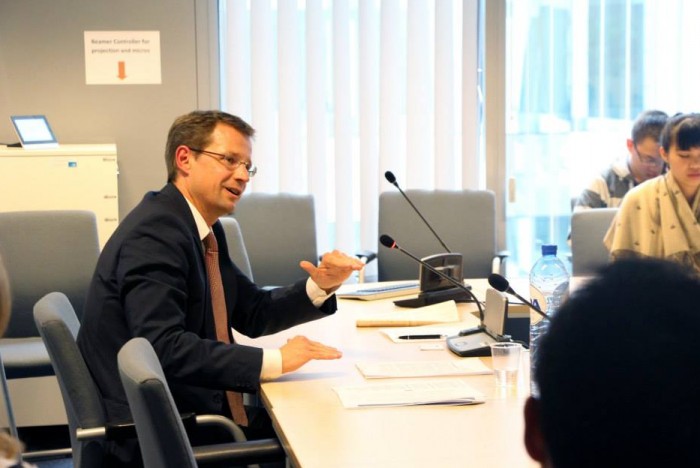 The last presentation was on EU policies and challenges associated with resolving the Eurozone Crisis by Ms. Wioletta Dunin-Majewska (Policy Communication Team, Directorate-General Economic and Financial Affairs – European Commission), who is responsible for the austerity policy. She has explained in detail the background, timeline and measures taken regarding the crisis. Students asked if it was the welfare social model that caused the crisis and what has been done to deal with the high unemployment rate.Throughout the day around 40 questions have been raised, showing their interests in the topics.

Flanders DC / OVAM / Design Flanders (Mechelen)
The group travelled to 3 cities that day to visit eco-design companies in the Flanders region. The visits were organized by Flanders DC. The first stop was OVAM, a public waste management agency located in Mechelen. Students were welcomed by the representatives of Flanders DC and were given a brief presentation on their work and entrepreneurial creativity in Flanders. One successful example of their work is that they have pulled designers and expertise in medical industry to work together for designing a brain scanner. They also provided policy recommendation. Students then asked about the advantages of Belgium in creativity industry. 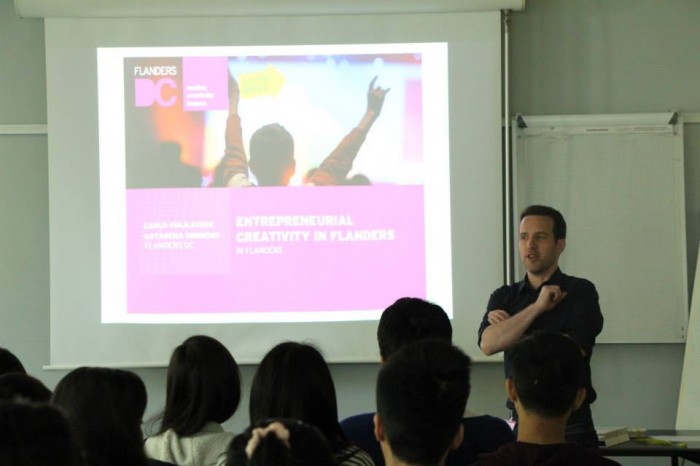 The next presentation was on OVAM’s background and work. Among all areas of work, they have highlighted their efforts in promoting eco-friendliness in design industry. They provide the local design firms and designers with data and suggestions on how to minimize eco-footprint right in every stage of the lifecycle of a product. For example, the “Ecolizer” which enables designers to calculate the environmental impact of a product by means of eco-indicators (raw material, means of transport). Another impressive example is the SIS-Toolkit providing guidance and analysis of sustainability for various capital and aspects concerned in a company. They also hold the annual Ecodesign Award for students and for professionals to encourage creativity in eco-design. To spread the message to a wider extent, they cooperate with Flanders DC to reach more design companies.
The next presentation was given by Design Flanders, an organization mainly promoting innovative design from Flanders and encouraging companies and governments to incorporate designs in their operations. Various events they have held were introduced including joint-city exhibitions. Compared to Flanders DC, Design Flanders deals with design more specifically while Flanders DC deals with the overall network of creativity entrepreneurship. There are also other regional hubs that deal with design firms directly, which are comparable to a chamber of commerce. 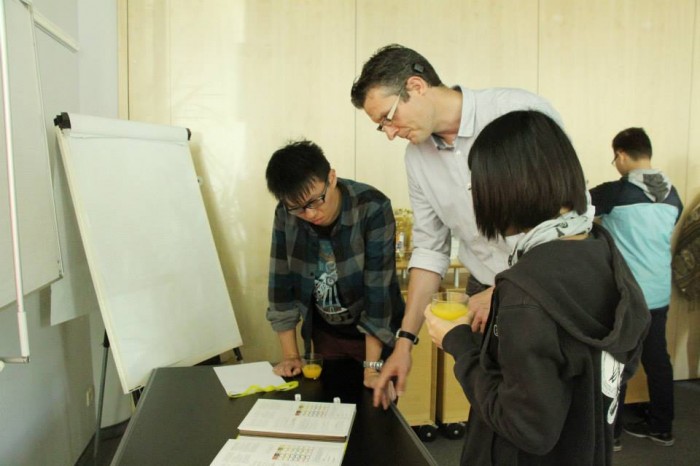 Buzzispace is one of the companies that have won the OVAM Eco-design Award Pro. They specialize in producing innovative acoustic products for households and the workplace. Students first took a visit at their headquarter where one can find the concept of their design well incorporated in the working environment. Then the students were brought to their warehouse for a presentation of their company and design concept. All acoustic materials they use are made from recycled plastic bottles and the products can be recycled again. Students were enthusiastic to try and test their products on the acoustic function.
The ecological concept can be found in all stages of the company. They never ship their products by air. They also insist on producing high quality products with skillful labour on location instead of re-locating the factories to Eastern Europe or LDCs, which compromise quality over a competitive price. Currently they are seeking possibilities to set up factories in Japan in order to open up Asian markets. 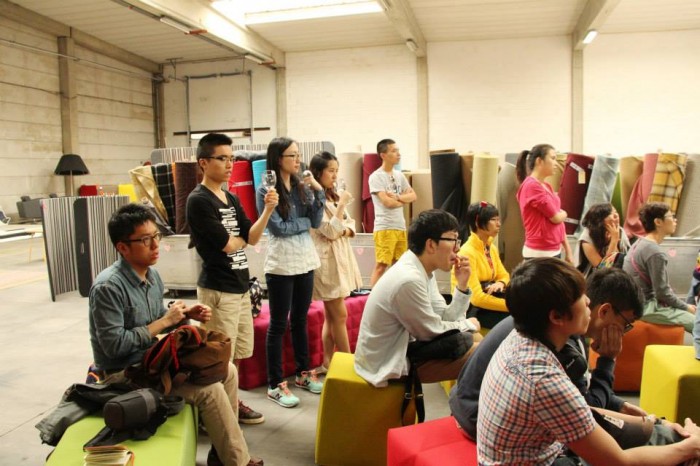 Participants were separated into two groups to go on a guided tour around the building. The C-Mine complex is a former coalmining site turned in recent years into a cultural centre of Genk. The guides showed our participants how the former coal factory space is now turned into different facilities with cultural, creative, design and recreational functions including theatre, cinema, exhibition venue, restaurants and the design academy of Genk. They also have year-round programme to engage the public in cultural activities. 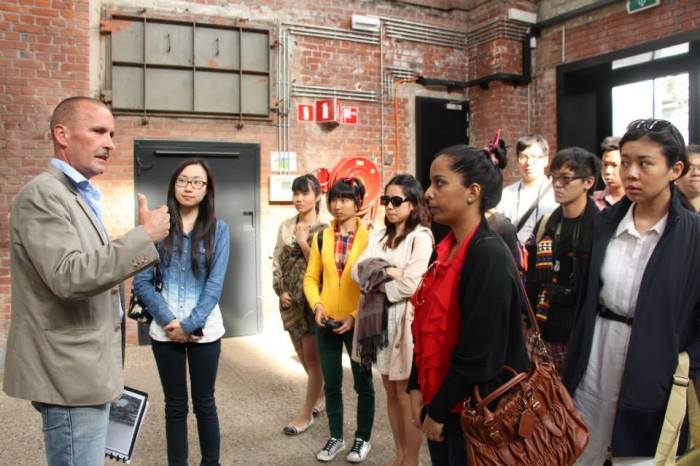 Apart from the official programme of the Summer Exchange Programme, the students have enjoyed themselves in the atmosphere of FIFA World Cup fever with the Belgian National team playing 2 games during the stay. 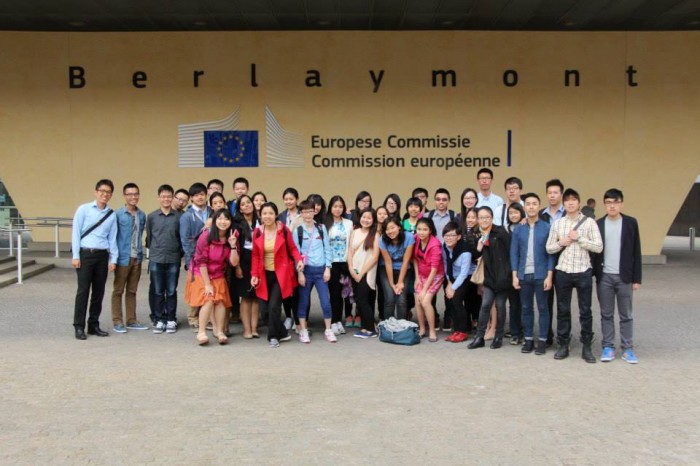