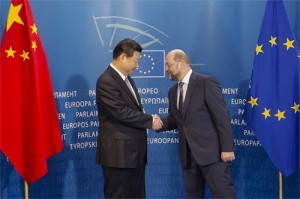 President Xi Jinping of the People’s Republic of China recently finished his diplomatic trip in Europe. The visit that started on the 22nd of March and ended on the 1st of April included the countries of Netherlands, France, Germany and Belgium. The visit focused on China’s major trading partners Germany and France and also in the strengthening of the economic and political partnership with the European Union. As a result, Mr. Xi met important European political figures including the heads of State of the four countries and the presidents of the European Parliament, Commission and Council.

General outcomes of the visit
Several outcomes came from Mr. Xi’s visit, especially the Chinese-European compromise of a closer partnership in important economic and political issues.

Social and diplomatic outcomes:
China and Europe made it clear that they stand by common values and beliefs; however it was also important to tolerate and respect each other’s decisions, acknowledging that the cooperation of the two blocks is highly important for the maintenance of the global stability.
More specifically, the topics boarded by the heads of government include:  the discussion and implementation of the EU-China 2020 Strategic Agenda for Cooperation1 ; the importance of human rights; external issues in Africa, Middle East and Ukraine; environmental changes and the compromise of cooperation in adopting a protocol under the United Nations Convention on Climate Change; cooperation in security and foreign policies; visit to the Nuclear summit; education and cultural exchange and piracy combat, among others2.

Among the most relevant discussions on economics, the EU expressed its support to the Chinese membership of TiSA (Trade in Service Agreements); to cooperate in the EU-China investment Agreement; to maintain the economic growth of both parties for global well-being; and to improve transportation liaisons in the China’s Silk Road Economic Belt3.

The trip
The visit started in the Netherlands with a meeting with the Dutch King Willem-Alexander and the Prime Minister Mark Rutt followed by Mr. Xi’s attendance to the Third Nuclear Security Summit in The Hague.
The main topic of discussion during the meeting with the Dutch government was the bilateral cooperation in cultural, economic, technology and education exchanges.

Although the participation of the Chinese president in the Third Nuclear Security Summit in the Netherlands was considered “very constructive”4 , Amnesty International organized a protest in the Dam Square in Amsterdam against the Human Rights violations in China.

The Next stop of the trip was France, where President Francois Holland welcomed the Chinese head of state in Paris.

As a result of the trip the French company Airbus and China formalized a 10 billion euro purchase on aircrafts.
On 28th of March president Xi Jinping arrived in Berlin. His talks with the German government focused on economic relations and foreign investment that concluded with trade agreements with German automobile enterprises Daimler and BMW.

The German Chancellor Angela Merkel made use of the opportunity to point out the importance of the respect of human rights for society development- a very delicate topic in China.

Germany refused a suggestion from the Chinese delegation to visit a Holocaust Memorial fearing that it would be a form of propaganda to highlight Chinese tensions with Japan over the latter war-time atrocities5.

This Sunday 30th of March, Mr. Xi arrived in Brussels with the intention of signing various agreements including economic, trade and education –among others-.

This is the first time in 27 years that a Chinese head of governments visits Brussels in a political trip, since the establishment of political ties between the two governments in 1975.

As an amicable gesture, considered as a symbol of well intentioned “soft power”6, the Chinese government gave Brussels two pandas which were relocated in a local zoo.

During his European visit, the president of China also visited local schools, the UNESCO and the EU headquarters in Brussels.

China was seeking to prepare the pavement to pursue a free trade agreement with the EU which is opposed by a large number of EU member states and supported by some such as the British Prime Minister David Cameron.

It is evident how important EU-Chinese relations are. As mentioned by president of the Commission Mr. Martin Schulz “For our relations to flourish, political dialogue – not only our commercial ties – must be reinforced.”7