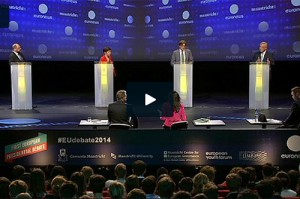 On 28th April four candidates for the Presidency of the European Commission faced off in a debate in Maastricht. Martin Schulz, Ska Keller, Guy Verhofstadt and Jean-Claude Juncker struggled with topics on economy, euroscepticism and the EU foreign policy. They were confronted with questions raised by the audience which was mostly made up of young students. For other EU citizens that were not present, they were also given a chance to post their questions on Twitter. Some of their concerns were later addressed in the debate.

The candidates were first asked about the economy and youth unemployment. Schulz touched upon problems faced by companies in countries with high unemployment rates. He proposed a micro-credit program led by the EU to support small and medium enterprises. In Verhofstadt’s opinion, actions taken so far were not enough to mitigate consequences of the economic crisis. He mentioned further European market integration as ’an engine for growth’. Nonetheless, he made clear that by more integrated EU he neither suggested building a “superstate” nor increase in bureaucracy, but rather opted for a less integrated market and more common policies within the EU. Keller reminded of the importance of green economy development, education and fighting climate change. She emphasized the need for investment in green technologies, renewables and energy efficiency in order to create more jobs in these sectors. Juncker stated his support towards solid public finances. He also suggested enlargement of the digital market and reinforcement of the services sector.
Schulz and Juncker shared their opinions about Eurobonds. Juncker clarified that although he was in favour of the idea, certain preconditions have to be put into place in order to make it applicable, such as stronger coordination of economic policies and tighter control over national budgets. Schulz argued that the proposal of Eurobonds does not have the support of majority of Europeans.

The discussion then continued with euroscepticism and the rise of populist parties in Europe. Schulz said that movements inciting hatred, xenophobia and scapegoat policies never propose real solutions to problems. He worried that if EU citizens do not take the European elections seriously, the chance for radical groups to enter the European Parliament will likely be increased. Verhofstadt supported this argument and added that retreating to national borders is not a panacea for all the EU’s problems, which instead should be handled on the European level. He also argued that criticism should be directed at solutions proposed by eurosceptics, not the problems they address. Keller pointed to the danger of centre-right parties following the slogans of the far right groups. She argued that eurosceptics are not necessarily against the EU, but most of them just strive for changes. Juncker expressed his disapproval of any kind of extremism and mentioned the difference between those who criticize and those who are anyway against European integration. The candidates presented similar opinions on immigration policies, stressing the importance of the system of legal immigration, responsibility sharing between member states and protection for asylum-seekers.

Questions on the EU foreign policy concentrated on the situation in Ukraine and Europe’s dependency on Russian energy supplies. In Juncker’s opinion, the EU has to defend European values and use soft power to put pressure on Russia. Ukraine has to undertake essential reforms to fight corruption and restore the rule of law. Europe’s energy supply should come from different sources in order to avoid political dependency on Russia. In the opinion of Schulz, the first priority is to support the unity of the country. He also referred to mutual interests of the European Union and Russia as potential base for diplomatic solution to the conflict. Verhofstadt insisted that the EU has to augment sanctions and give a clear signal of opposition to Russian interference in Ukraine. Keller opted for seeking peaceful solution which should be based on dialogue, but not on the rhetoric of the Cold War. Moreover, she argued that the dependency on Russia can be reduced by investment in renewable energy.

In closing remarks Juncker stressed that he would like to fight against divisions in Europe, concentrate on main objectives of policy making and propose concrete solutions. Schulz put the emphasis on bringing back justice and fairness, as well as shifting the focus from banks and speculators to ordinary citizens. Verhofstadt said that the EU needs new leadership different from conservative and socialist camps. Keller would like to see Europe more caring and responsive to its citizens.

Watch the Full Debate (in English)