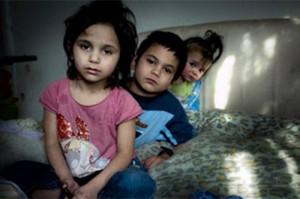 On 13 August, the EU Commissioner for Culture Androulla Vassiliou visited Slovak city of Kosice complaining to mayor Richard Rasi, pointing out that the wall separating Roma families from majority Slovaks violated the EU’s stand against racism. Ms Vassiliou had asked the mayor “as a matter of urgency… to remedy this unfortunate situation”. The authorities of the city say they are taking legal action to remove it.

The Kosice wall was the eighth such project in eastern Slovakia since 2009 and the fourteenth place in  the whole Slovakia, reported by CTK news agency.

But this is not an individual case in Europe. There has been a long tradition of discrimination against Roma communities in Slovakia, the Czech Republic, Hungary and Serbia. Many Roma live in extreme poverty and suffer from disease and illiteracy.

Last weekend, hundreds of anti-Roma activists have marched in towns and cities across the Czech Republic, where some extreme-far marchers left the approved route and tried to bursted into the communities with large Roma populations. At least 75 paraders were arrested. President Milos Zeman condemned the anti-Roma demonstrations on Sunday.

“We have seen a deeply worrying trend over the past year with entrenched discrimination against Roma reaching new heights. This is a fundamental issue that the Czech authorities can’t ignore,” warned by Amnesty International’s John Dalhuisen earlier this month, urging officials to protect the Roma community.

The 2011 census released that Roma population of Slovakia was at about 0.1 million out of a total of 5 million. While the Czech Republic has a Roma population estimated at between 250,000 and 300,000. FRA estimates that there are 10-12 million Roma in Europe.

European Union has been taking measure against discrimination in the member states. A decade has now passed since the adoption of the two Anti-discrimination Directives which all EU Member States had to implement by 2003. They launched the principle of equal treatment and protected racial and ethnic groups in different fields of life such as employment, social protection, social advantages, education, and access to and supply of goods and services including housing.