The Eurozone finance ministers meeting, on 16 Feb, with regard to the topic of Greece’s future bailout broke down as the Greek finance minister, Yanis Varoufakis objected the proposal to extend its bailout programme for another six months. The current Greece’s €240bn bailout programme will expire on 28 February and it is estimated that Greece would need around €4.3 bn by the end of first quarter to repay its debts. Therefore time is running out for Greece. Without any agreement of additional funding, the market is concerned that there could be a bank run in Greece.

However, there is still substantial difference between Greece and its Eurozone partners. According to the German finance minister Wolfgang Schäuble, “the problem is that Greece has lived beyond its means for a long time and that nobody wants to give Greece money any more without guarantees.” On the other hand, it will be difficult to imagine that the Greek Syriza led government would accept any agreement which very much different from their electoral promises.  The next following days will be crucial for the development of Greece. 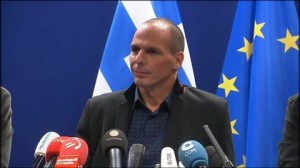