The 8th round of the negotiation of The Transatlantic Trade and Investment Partnership (TTIP) started on 2 February. The meeting is the first since the new European Commission President Jean-Claude Juncker and the Commissioner of Trade Cecilia Malmström took office in November 2014. The TTIP negotiation was officially launched in February 2013 when the US President Obama and the EU Commission President Barroso made the public announcement.  A wide range of issues in three broad areas, namely market access for goods, specific regulation and broader rules and principles and modes for co-operation, is the key discussion topic. It is the top priority of the foreign and economic agenda in both the US and the EU and this trade agreement would be potentially the largest regional free-trade agreement in history. It is expected that the TTIP can bring economic growth (estimating boosting GDP growth by 1-3% annually according to previous studies) and create jobs in both regions and it also help strengthen their position in setting the global norms and rules in world trade.

Despite strong political support, the TTIP is now facing increasingly strong opposition from Europe, especially in Germany where 1.2 million people signed a “Stop TTIP” petition in just ten weeks.  There has also been growing resistance from countries like France, the Netherlands, Spain and even the UK. Much public criticism of TTIP focused on the lack of transparency of the negotiations. Some critics see that the agreement is mainly driven by big business interest and people are concerned whether TTIP would threaten their job security, lifestyle or traditions. NGOs are also worried about data protection issue after the revelations of US surveillance of European in the past few years. ISDS (investor-state dispute settlement), which requires investors in the signatory states to settle the dispute in international forum, is also a main reason of deadlock. While the US wants to include ISDS in the TTIP, many Europeans are skeptical that the system could be used against public interest, for example public health related issues.

It will be of significant costs for both the EU and the US if no agreement could come about. Observers comment that the EU has to rethink its negotiation strategy in order to convince the public and compensate member states who would potentially be worse off in the agreement. 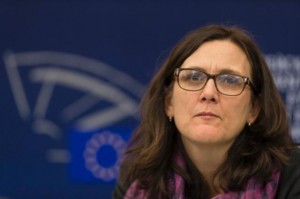 For further reading on this: